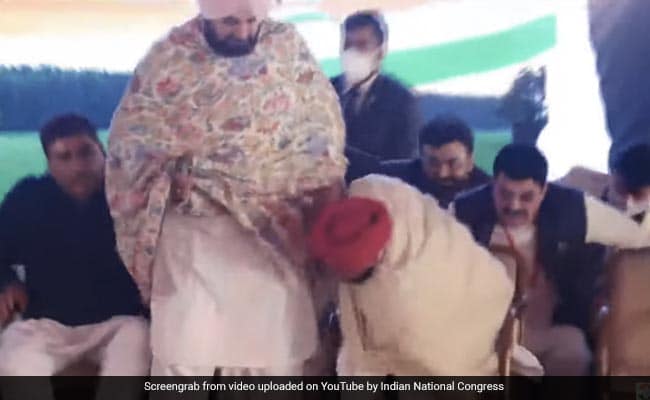 Charanjit Singh Channi is Congress’s presumptive Chief Minister in Punjab, Rahul Gandhi announced this afternoon, with Navjot Sidhu slipping out of the hotly contested race for the top job but not before scoring an assurance that he will have a pivotal role in ruling the state if the government was re-elected.

Soon after the announcement, Mr Channi, who is also the first Dalit Chief minister of the state, was seen touching Mr Sidhu’s feet.

Then came the Kodak moment, Mr Sidhu, the Punjab Congress chief, cheered the presumptive Chief Minister by raising his hand in jubilation – like a referee lifts the winning boxer’s hand after the final round.

Thereafter, all three leaders – Rahul Gandhi, Navjot sidhu, Charanjit Channi – were group hugging. And then in a big show of strength, they raised their hands in the air, ending weeks of speculation about the infighting in the party and sending out the message of solidarity.

“Sidhu ji, Jo tusi karna chahte ho, tusi karoge (Whatever you want to do, you’ll do). Your model will be implemented,” said Mr Channi in his first comments after accepting the responsibility.

Underscoring that the Congress has its “system to develop leaders”, Rahul Gandhi gave his own example in what was seen as a message to Mr Sidhu, who joined the party just ahead of the 2017 polls, after 13 years in the BJP.

“Channi is the son of a poor family. He knows poverty. Did u see any arrogance in him? He goes and meets people… Channi is the voice of the poor,” said Mr Gandhi declaring Mr Channi’s name.

Mr Sidhu, who in his address, had declared that he has “already agreed with Rahul Gandhi’s decision” said, “Even if you don’t give me decision-making power, still I will support the next Chief Minister.”

But there was a rider. While insisting that he only sought the welfare of Punjab, Mr Sidhu said “Don’t treat me like a showpiece”.

The voting for 117-member state assembly will take place on February 20. The votes will be counted on March 10, along with four other states.