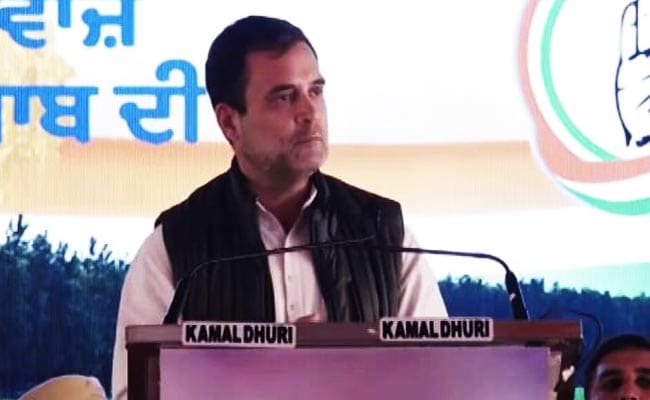 Rahul Gandhi said, “I have not learnt as much as I have in the last six or seven years”.

“Political leaders are not born in 10-15 days, leaders are not made by participating in television debates,” Congress’s Rahul Gandhi said today at a virtual rally in Ludhiana, minutes before announcing Chief Minister Charanjit Singh Channi as the party’s Chief Ministerial candidate, crushing once again Navjot Sidhu’s aspiration for the top post. Mr Gandhi, however, made it clear that the decision was not his.

“I have not decided about it. I asked this to Punjab’s people, youth, members of working committee… I may have an opinion but your opinion is more important than mine… Punjabis told us that we need a person who can understand the poor,” Mr Gandhi said.

Underscoring that the party has its “system to develop leaders”, he gave his own example in what was seen as a message to Mr Sidhu, who joined the party just ahead of the 2017 polls, after 13 years in the BJP.

“I have been in politics since 2004… I have not learnt as much as I have in the last six or seven years. Those who think politics is an easy job, they are wrong. There are many commentators, but it is not easy to groom a leader,” he said.

In his address, he summed up the two aspirants — Mr Sidhu and Mr Channi, recalling his meeting 40 years ago with the former at a cricket match in Doon School which he attended and the little-known details about the latter.

“Channi is the son of a poor family. He knows poverty. Did u see any arrogance in him? He goes and meets people… Channi is the voice of the poor,” he said.

Drawing a distinction between Mr Channi and the two biggest campaigners of the BJP, he said, “Modi ji is Prime Minster, Yogi jee is a Chief Minister. Have you seen the PM going and meeting people? Have you seen the PM helping anyone on the road? PM Modi is a raja (king), he won’t help anyone”.

As for Mr Sidhu, “He is emotional. So what?” added Mr Gandhi.

Mr Sidhu, who in his address, had admitted that he has “already agreed with Rahul Gandhi’s decision” said “Even if you don’t give me decision-making power, still I will support the next Chief Minister”.

But there was a rider. While insisting that he only sought the welfare of Punjab, Mr Sidhu said “Don’t treat me like a showpiece”.

“Showpiece” has been a recurring motif in Mr Sidhu’s opposition to Mr Channi and his predecessor Amarinder Singh, especially since his elevation as the chief of the party’s state unit.

The cricketer-turned-politician, who had hoped to succeed Mr Singh to the top post, had turned a relentless critic of the government led by Mr Channi, going to the extent of writing to Sonia Gandhi about his take on government’s policies and asking her to give directions to the government.