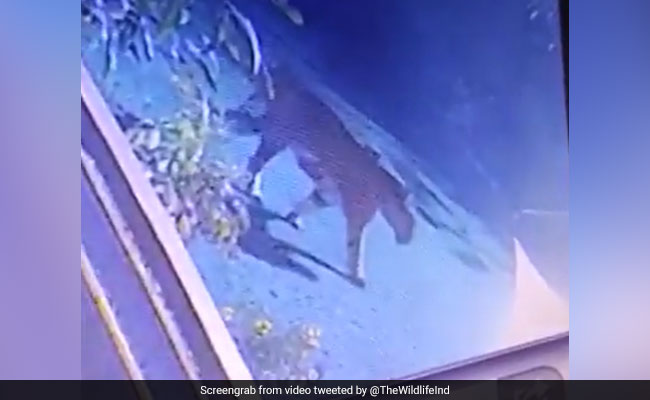 A tiger entered the campus of the Bhoj Open University vice chancellor’s bungalow on busy Kolar Road in New Bhopal in Madhya Pradesh, with CCTV cameras managing to capture images of the big cat loitering there.

“In the early hours of Sunday, I saw the watchmen sprint towards the guard room. When I asked them what the matter was, they asked me to stay indoors as a wild animal was wandering nearby,” Mr Sonwalkar said.

“The watchmen were doing the rounds of the premises when they flashed a torch at a spot and saw the tiger, which let out a roar. Forest officials were informed and they arrived here. While at first it seemed it was a panther as per the pugmark, a check of the CCTV confirmed it was a tiger,” he added.

The VC’s bungalow is situated in the 25-acre Bhoj University campus, which itself is close to Kaliyasot Dam built to supply water to Bhopal.

The Samarda-Kaliyasot area has 1,202 households, and a wildlife expert said Kaliyasot Dam close to Kerwa Dam situated in forested area in Bhopal is a tiger corridor between Ratanpani Sanctuary in Raisen district and Kheoni Sanctuary in Dewas district of MP.