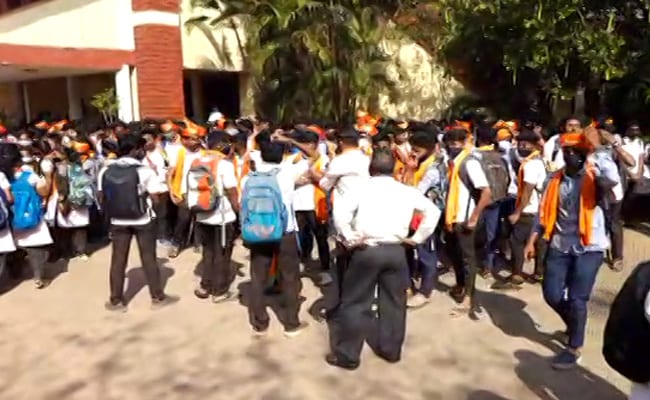 A massive crowd of students, one group wearing hijab and boys waving saffron scarves, gathered outside a college in Karnataka this morning in a snowballing confrontation on a day the High Court takes up a petition challenging a ban on the hijab on campus.

As two groups stood at the gates of the MGM college in Udupi, a large number of policemen were called in to control the chaos.

Students wearing saffron scarves and headgears were allowed to enter the college as young women in the hijab stayed outside the gates, protesting what they alleged was discrimination.

“Why are we not being allowed? They are wearing saffron scarves ow. We have been wearing the hijab since childhood. They pushed us out of the college gates,” said a student in hijab.

As the situation threatened to escalate, the college staff tried to herd the saffron-wearing group outside the gates.

The hijab versus saffron scarves on campus clash has taken hold of many colleges in Karnataka. A few colleges declared a holiday to avoid communal trouble while another college allowed students wearing the hijab in separate classrooms.

The High Court will hear petitions filed by five women from a government pre-university college in Udupi, questioning hijab restrictions.

The hijab protests began last month at the Government Girls PU college in Udupi district when six students alleged that they had been barred from classes for insisting on wearing the headscarf. Right-wing groups in Udupi and Chikkamagaluru objected to Muslim girls wearing the hijab to class.

The protests spread to more colleges in Udupi and beyond, with staff banning the hijab and many students taking a confrontational position by showing up in saffron scarves and shouting slogans.

“In the event of the administrative committee not selecting a uniform, clothes which disturb equality, integrity and public law and order should not be worn,” the order said.

“The education department has noticed that in some education institutions, the boys and girls have started behaving according to their religion, which hurts the equality and unity,” it added.

The row has taken a political turn with the state’s opposition Congress accusing the BJP and its ideological mentor RSS (Rashtriya Swayamsevak Sangh) of trying to stir communal strife in the state.