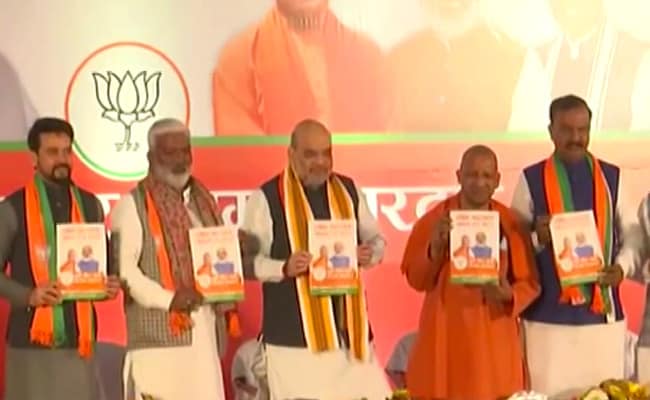 The BJP on Tuesday launched its manifesto for the Uttar Pradesh Assembly election – to begin in less than 48 hours – with a long list of ‘freebies’ for voters, including the promise of free electricity (for irrigation purposes) for all farmers and jobs to at least one member of each family.

In what will certainly become a controversial declaration, Mr Shah also said those found guilty of ‘love jihad’ – the right-wing conspiracy theory that Muslim men seduce Hindu women to convert them – would be jailed for 10 years and fined Rs 1 lakh.

Other promises made by the ruling party – which is widely seen as facing a stern challenge from Akhilesh Yadav’s Samajwadi Party to retain control of UP – include a commitment to double the state’s per capita income and attract up to Rs 10 lakh crore in investment.

The party also promises an increase in pension for widows to Rs 1,500 per month.

“A few days ago Akhilesh Yadav waved our 2017 sankalp patra (the BJP’s 2017 election manifesto) and asked what we did… I can say with pride that 92 per cent of our 212 pledges have been fulfilled…” Mr Shah declared in Lucknow today.

Taking several swipes at Mr Yadav and the Samajwadi Party, whom the BJP ousted in the 2017 election, Amit Shah said: “UP was considered a riot-prone state five years ago. Mothers and sisters were not safe, especially in western Uttar Pradesh and Awadh region.”

Western UP will be the first region to vote in the seven-phase 2022 Assembly election, wich begins February 10. Votes will be counted on March 10.

Among the issues for voters in west UP districts are concerns faced by sugarcane farmers, who have been crying out for the state government to settle long-pending financial dues. The BJP, Mr Shah declared, would expedite these payments and charge interest from sugar mills in case of delays.