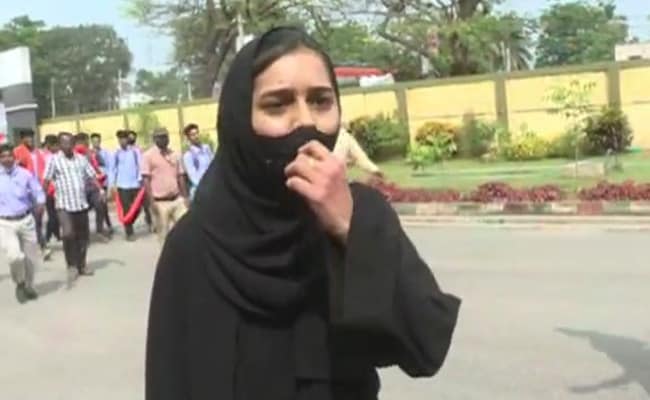 Asaduddin Owaisi said that that her act of fearlessness has become a source of courage for all.

All India Majlis-e-Ittehadul Muslimeen (AIMIM) President Asaduddin Owaisi on Wednesday spoke to the hijab-clad student who was heckled by boys wearing saffron scarves in a viral video from Karnataka that has triggered massive outrage.

Mr Owaisi said that that her act of fearlessness has become a source of courage for all.

“Spoke to Muskan and her family on call. Prayed for her to remain steadfast in her commitment to education while also exercising her freedom of religion and choice. I conveyed that her act of fearlessness has become a source of courage for us all,” tweeted the AIMIM leader from Hyderabad.

The AIMIM leader appreciated her parents for her unapologetic upbringing.

He tweeted, “Also appreciated her parents for her unapologetic upbringing. Coincidentally, I had the honour of meeting her father at a function during my campaign in 2018 Karnataka Assembly elections for JD(S).”

A video that showed Muskan getting heckled on her arrival at her college in Karnataka wearing a hijab by saffron-clad students was widely shared a day ago, sparking an outcry.

The standoff over hijabs in the Karnataka began in January this year when some students at the Government Girls PU college in Udupi district in Karnataka alleged that they had been barred from attending classes. During the protests, some students claimed they were denied entry into the college for wearing hijab.

Following this incident, students of different colleges arrived at Shanteshwar Education Trust in Vijayapura wearing saffron stoles. The situation was the same in several colleges in the Udupi district

The pre-University education board had released a circular stating that students can wear only the uniform approved by the school administration and no other religious practices will be allowed in colleges.

Following these protests, a three-day holiday from February 9 has been declared in all the universities under the Department of Higher Education and colleges under the department of Collegiate and Technical Education (DCTE).

On Tuesday, the Karnataka High Court also appealed to the student community and the public at large to maintain peace and tranquillity while hearing various pleas challenging a ban on hijab in the state.

The Court also said that a plea relating to seeking interim relief will also be considered by a larger bench.