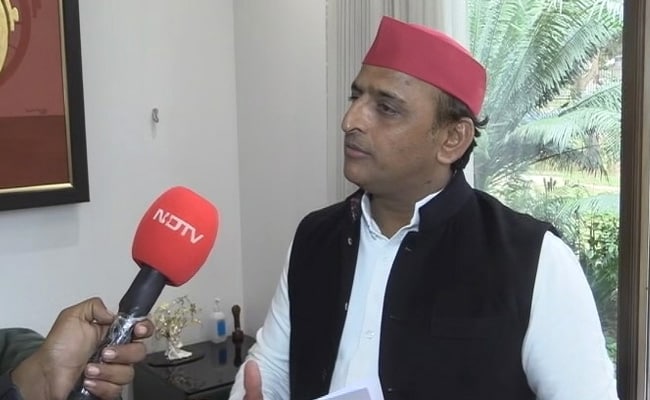 UP Election: Akhilesh Yadav and the Samajwadi Party are widely seen as the BJP’s biggest challengers

Akhilesh Yadav took on the BJP on Wednesday – hours before Uttar Pradesh begins its seven-phase Assembly election – telling NDTV the ruling outfit “should observe two minutes’ silence (for failing to deliver on its promises) before commenting on those offered by his Samajwadi Party.

In his first interview since launching the party’s manifesto – Vachan Patra – yesterday, Mr Yadav said the BJP “lies in the name of law and order” and countered Amit Shah’s ‘mafia’ charge; the Union Home Minister had said criminals in UP were either in jail or on a list of Samajwadi candidates.

Mr Yadav also told NDTV the BJP would be defeated in the western districts of UP, which vote tomorrow, and from which region he expects angry farmers to boot out the ruling party.

“Announcements made by the Samajwadi Party in our manifesto were made after talking to experts… this is for the people of Uttar Pradesh. But if you see the BJP’s manifesto, it is full of lies of false promises… the BJP’s Sankalp Patra is actually a Jhoota Patra,” Mr Yadav told NDTV.

“Lots of promises made… first was for farmers. They said they would double farmers’ incomes but this did not happen. The BJP should observe two minutes’ silence before saying anything,” he said.

As part of its major promises, the Samajwadi Party has said it will make more than one crore jobs available, make electricity (for irrigation) free for farmers, and make education for girls free.

On the ‘mafia’ charge Mr Yadav said: “It is the BJP which has given most election tickets to criminals and the mafia. They say we did, but all you have to do is compare…”

“We will pass a new law against criminal gangs in Uttar Pradesh (if elected),” he said, in response to BJP’s charges that thugs would harass people when the Samajwadi Party was in power (2012-17).

“As socialists we, the Samajwadi Party, will never abandon anyone. I will not leave behind Jayant as the BJP claims,” he stressed, after Mr Shah, last week, cautioned Mr Chaudhary over his alliance.

“Jayant babu it is a fallacy. Someone who does not listen to his own father and uncle, how would he listen to you,” Amit Shah had said, in what many have seen as a veiled outreach effort by the BJP.

Uttar Pradesh will vote in a seven-phase election starting tomorrow with results due on March 10.

On Sunday Mr Yadav, who will contest his first state election from his family’s stronghold of Karhal, said the first phase of polling would be an “eye-opener” for the BJP.