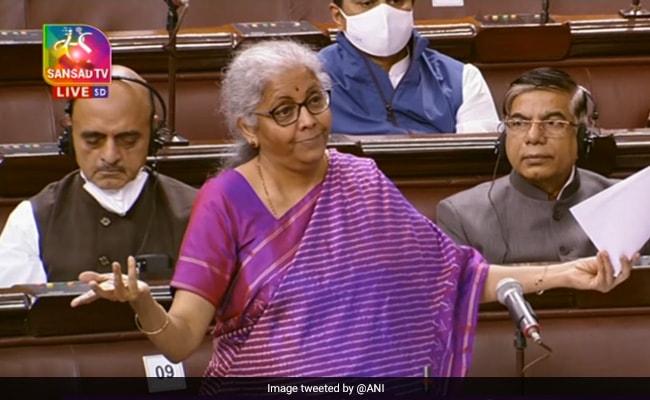 Finance Minister Nirmala Sitharaman – facing flak for a budget critics and opposition leaders say has ignored the poorer sections of the country – took a leaf out of Prime Minister Narendra Modi’s book and fought back by targeting Congress MP Rahul Gandhi in her speech to the Rajya Sabha.

Ms Sitharaman dug out a 2013 comment – Mr Gandhi had called poverty a “state of mind”, saying “… does not mean the scarcity of food, money or material things” and “… if one possesses self-confidence, then one can overcome poverty” – to criticise the Congress leader.

“Your former president said, ‘Poverty does not mean scarcity of food, money, or material things. If one possesses self-confidence one can overcome it’. He also said, ‘It’s a state of mind’. I am not naming the person but we know who it is,” Ms Sitharaman said.

“Please be clear… is this the ‘poverty’ you want me to address? The ‘poverty of the mind’…” the Finance Minister continued amid shouts of disapproval from opposition MPs.

She quoted pre-2014 consumer price index figures of 9.1 per cent during the global financial crisis as against 6.2 per cent now during Covid to declare “the opposition couldn’t handle a lesser crisis”.

Ms Sitharaman also attacked the Congress after Kapil Sibal’s comment that India is not in ‘amrit kaal‘ but ‘rahu kaal’ – an inauspicious period of the day, according to Hindu astrology – since 2014.

“No wonder we are calling it ‘amrit kaal. If we don’t have a vision at 100 (years of independence), we will suffer… when 65 years were with Congress that had no vision except benefitting one family.”

“‘Rahu kal‘ is when the Congress says ‘ladki hoon, lad sakti hoon‘ (a reference to the party’s slogan for elections in UP and other states) but girls are not able to fight in Rajasthan,” the Union Minister said.

‘Rahu kaal‘ was then, when an ordinance brought by the Prime Minister of their own party was torn in front of the media,” she went on, referring to Mr Gandhi’s reaction to a 2013 ordinance by the former Congress-led UPA government on convicted lawmakers.

The Congress, meanwhile, has claimed the government is lashing out because it is “scared of Rahul Gandhi”; Mr Gandhi this week declared the Prime Minister was afraid of the party.

“The Finance Minister has given a statement on Rahul Gandhi in anger… We raised this question in the discussion on the budget that 27 crore people have gone below the poverty line because of this economic crisis…” MP Shaktisinh Gohil said, adding, “We had put many questions regarding farmers, unemployment and the coronavirus crisis… but the finance minister did not answer our questions.”

Ms Sitharaman presented the 2022/23 Union Budget on February 1, after which Rahul Gandhi and other leaders slammed the document, calling it a “zero sum budget” with no provisions for the middle class or those from poor or deprived sections of society.

With input from ANI, PTI