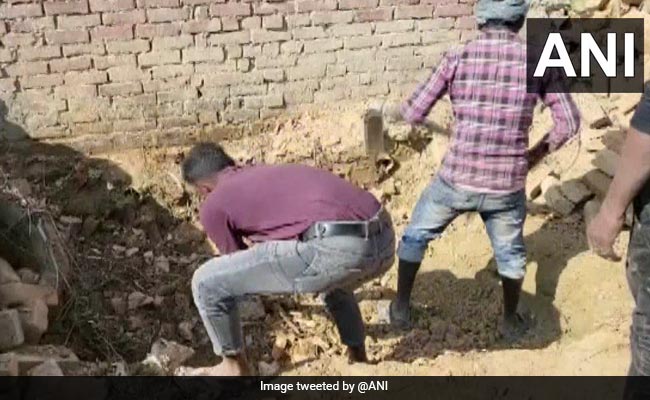 Unnao: The main accused in the case is the son of an ex-Samajwadi Party MLA.

The body of a 22-year-old Dalit woman, who went missing two months ago from Uttar Pradesh’s Unnao, has been found in a pit near an ashram constructed by a Samajwadi Party leader. The grisly find could not have come at a worse time for Samajwadi chief Akhilesh Yadav, who is facing attacks from the BJP in the middle of the UP election.

The woman’s family refused to cremate her for hours, demanding action against the Samajwadi politician’s son, who is the main suspect.

The young woman’s decomposing body was dug out from an empty piece of land near the ashram in the name of Fateh Bahadur Singh, who was a minister in the Samajwadi Party government of Akhilesh Yadav in 2012-17.

“The person who they are saying belongs to the Samajwadi Party died four years ago. Police should answer why they took so many days to act on the matter. We are with the victim’s family and their demands should be fulfilled,” Akhilesh Yadav told ANI.

Fateh Bahadur Singh’s son Rajol Singh was questioned when the family accused him of kidnapping the young woman. That is when the police reportedly learnt where the body was buried. A post-mortem revealed multiple wounds on her body.

“We interrogated the accused Rajol Singh on remand. After which we recovered the woman’s body on Thursday. The body was buried in the plot near the ashram. We used local intelligence and mobile surveillance to identify the spot where the body was buried,” said Unnao’s Additional Superintendent of Police Shashi Shekhar Singh.

The police said the case appeared to be one of an affair gone wrong.

The woman went missing from her home on December 8, 2021.

Her family had accused Rajol Singh of kidnapping her but claim the police did nothing to find her.

On January 24, the woman’s mother tried to throw herself in front of Akhilesh Yadav’s convoy.

The Samajwadi leader’s son was arrested when the case gained spotlight.

A police inspector has been suspended and a second person has been arrested.

The BJP accused Akhilesh Yadav of ignoring the woman’s mother when she came in front of his convoy.

“Akhilesh Yadav, a Dalit daughter’s body has been found from a Samajwadi Party leader’ land. You didn’t listen to the girl’s mother when she was begging in front of your car. You are shielding your party leader. You will shield every crime of Samajwadi Party leaders. You will leave no stone unturned to help the accused,” Deputy Chief Minister Keshav Prasad Maurya said.

“The recovery of the body of a Dalit girl in the SP leader’s field in Unnao district is a very sad and serious matter. The family members were already suspecting the SP leader about her abduction and murder. The state government should immediately take strict legal action against the culprits to get justice for the victim’s family,” she tweeted.