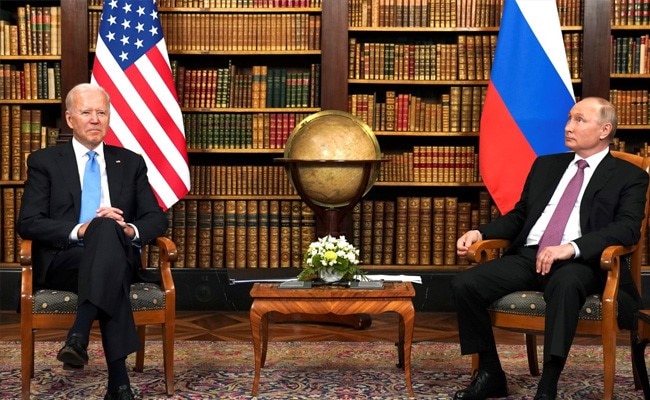 The Biden-Putin talks produced “no fundamental change” in dynamics, a senior US official said (File)

Efforts to defuse the crisis in Ukraine via a frenzy of telephone diplomacy failed to ease tensions Saturday, with the White House insisting that Russia faces “swift and severe costs” if its troops carry out an invasion.

Russian President Vladimir Putin slammed Western claims that such a move might be on the horizon, calling the idea “provocative speculation” that could lead to a conflict in the ex-Soviet country, according to a Russian readout of a call with French President Emmanuel Macron.

Weeks of tensions that have seen Russia nearly surround its western neighbour with more than 100,000 troops intensified after Washington warned that an all-out invasion could begin “any day” and Russia launched its biggest naval drills in years across the Black Sea.

“If Russia undertakes a further invasion of Ukraine, the United States together with our Allies and partners will respond decisively and impose swift and severe costs on Russia,” US President Joe Biden told Putin, according to the White House.

While the United States was prepared to engage in diplomacy, “we are equally prepared for other scenarios”, Biden said, as the two nations stare down one of the gravest crises in East-West relations since the Cold War.

While the Biden-Putin talks were “professional and substantive”, lasting just over an hour, they produced “no fundamental change” in dynamics, a senior US official told reporters.

Russia’s defence ministry added to the febrile atmosphere by announcing that it had chased off a US submarine that it alleged had crossed into its territorial waters near the Kuril Islands in the northern Pacific.

The ministry said it had summoned the US defence attaché in Moscow over the incident, while the Pentagon said only that it was aware of press reports.

Putin began his afternoon by holding talks with Macron that the French presidency said lasted one hour and 40 minutes.

Macron’s office said “both expressed a desire to continue dialogue” but, like Washington, reported no clear progress.

Russia on Saturday added to the ominous tone by pulling some of its diplomatic staff out of Ukraine.

The foreign ministry in Moscow said its decision was prompted by fears of “possible provocations from the Kyiv regime”.

But Washington and a host of European countries along with Israel cited the growing threat of a Russian invasion as they called on their citizens to leave Ukraine as soon possible.

Britain and the United States also pulled out most of their remaining military advisors while the US embassy ordered “most” of its Kyiv staff to leave.

Dutch carrier KLM announced that it was suspending commercial flights to Ukraine until further notice.

The prospect of fleeing Westerners prompted Kyiv to issue an appeal to its citizens to “remain calm”.

“Right now, the people’s biggest enemy is panic,” Ukrainian President Volodymyr Zelensky said on a visit to troops stationed near the Russian-annexed peninsula of Crimea.

Several thousand Ukrainians braved the winter cold to march through Kyiv in a show of unity amid the growing fears of war.

“Panic is useless,” said student Maria Shcherbenko as the crowd waved Ukraine’s blue-and-yellow flags and sang the national anthem. “We must unite and fight for independence.”

Washington on Friday issued its most dire warning yet that Russia had assembled enough forces to launch a serious assault.

“Our view that military action could occur any day now, and could occur before the end of the Olympics, is only growing in terms of its robustness,” US National Security Advisor Jake Sullivan warned.

US military assessments had earlier said the Kremlin may want to wait for the Beijing Winter Olympic Games to end on February 20 before launching an offensive so as not to offend Russia’s ally China.

Ukrainian leaders have been trying to talk down the prospects of an all-out war because of the damaging effect such fears were having on the country’s teetering economy and public morale.

But the mood across the country remained tense.

The mayor’s office of Kyiv announced that it had prepared an emergency evacuation plan for the capital’s three million residents as a precaution.

Sullivan stopped short on Friday of saying that the United States has concluded that Putin has made the decision to attack.

But some US and German media cited intelligence sources and officials as saying that a war could begin at some point after Putin concludes talks with German Chancellor Olaf Scholz in Moscow on Tuesday.

The German leader is due to travel to Kyiv on Monday and then visit Putin as Europe strives to keep lines of communication open with Moscow.

Russia is seeking binding security guarantees from the West that include a pledge to roll NATO forces out of eastern Europe and to never expand into Ukraine.

Washington has flatly rejected the demands while offering to discuss a new European disarmament agreement with Moscow.

Germany’s Scholz has added his voice to European pledges to punish Russia with severe economic sanctions targeting its financial and energy sector if it attacks.