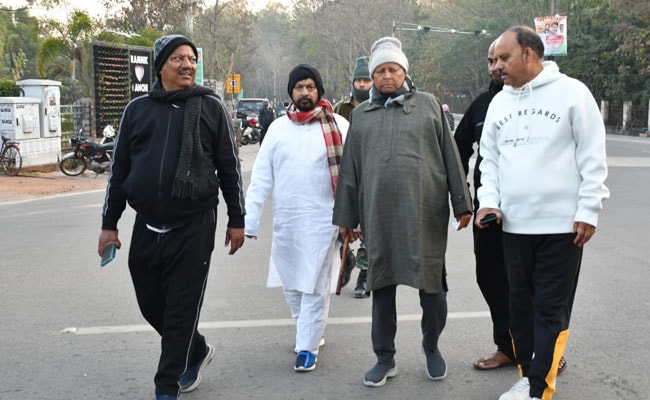 RJD chief and ex-Bihar Chief Minister Lalu Prasad Yadav has been found guilty of illegal withdrawals of Rs 139.35 crore from the Doranda treasury by a special CBI court in Jharkhand’s Ranchi.

Lalu Yadav – who has now been convicted in all five fodder scam cases in which he was named as a conspirator – was present in the courtroom Tuesday morning as Judge CK Shashi read out verdict.

98 other accused were also physically present, of whom 24 were acquitted.

Of the rest, 35 were sentenced to three years in jail, including former MP Jagdish Sharma and then Public Accounts Committee (PAC) Chairman Dhruv Bhagat. This qualifies them to move for bail.

Sentencing for Lalu Yadav and the 39 others found guilty will take place on February 21.

For his conviction in the Dumka case he was also handed a fine of Rs 60 lakh.

He has challenged all four previous convictions and will likely challenge this too.

All cases relate to the swindling of government funds meant for cattle fodder.

So far he has been sentenced to a total of 14 years in prison, but is out on bail for the four convicted cases; the last (the Dumka treasury case) was in April last year. The case involves funds taken by Bihar’s Animal Husbandry Department between 1991 and 1996, when Lalu Yadav was Chief Minister.

He has also spent over 3.5 years in judicial custody as part of his sentencing.

In jail since December 2017, the 73-year-old served most of his sentence at Jharkhand’s Rajendra Institute of Medical Sciences. He was brought to Delhi in January last year after his health worsened.

However, if given a sentence of over three years in this case, Lalu Yadav will have to return to jail.

In his absence, his son Tejashwi Yadav led the RJD and is credited with the party’s strong showing in the 2020 Bihar election; it was the first time in 40 years Lalu Yadav missed a state poll campaign.

His absence, though, has not led to him relinquishing control over the RJD.

Last week he made it clear he had no such plans, despite his legal and medical problems, and that his son, Tejashwi Yadav, would have to wait before replacing him at the head of the party.

Tejashwi Yadav is now Leader of the Opposition in the Bihar Assembly.