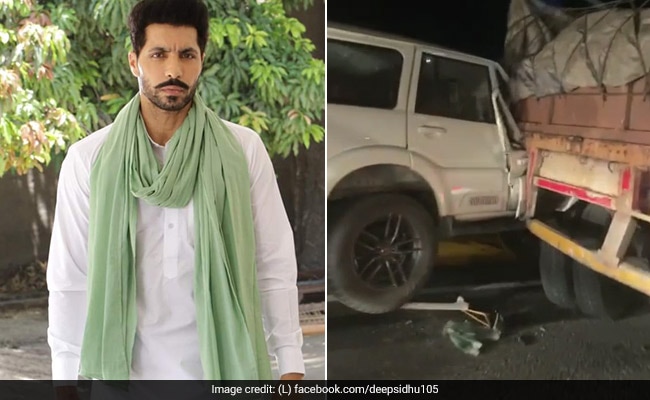 Actor Deep Sidhu who was out on bail in the Republic Day violence case in January last year has died in a road accident. The accident happened on the Kundli-Manesar-Palwal (KMP) Expressway that bypasses Delhi. Visuals from the accident site show a white Mahindra Scorpio smashed on the rear of a trailer truck; the SUV’s driver side area is completely pushed in by the impact.

Mr Sidhu was going from Delhi to Bhatinda in Punjab when the SUV in which he was travelling rammed a trailer truck at 9:30 pm today, the police said.

Mr Sidhu was arrested by the Delhi Police in February last year in connection with a tractor rally by farmers on Republic Day that spiralled into violence after protesters came to the Red Fort and attacked policemen. The farmers were protesting against three new farm laws, which were withdrawn by the centre in November 2021.

He got bail in April, but was arrested again just after he was released. He was released on bail a second time in late April, with a court in Delhi making it clear he has to appear for questioning whenever the police called him.

Mr Sidhu was accused of being the key conspirator of the violence at Red Fort.

Punjab Chief Minister Charanjit Singh Channi tweeted his condolences on the actor’s death. “Deeply saddened to learn about the unfortunate demise of renowned actor and social activist, Deep Sidhu. My thoughts and prayers are with the bereaved family and fans,” Mr Channi tweeted.

Deeply saddened to learn about the unfortunate demise of renowned actor and social activist, #DeepSidhu. My thoughts and prayers are with the bereaved family and fans.