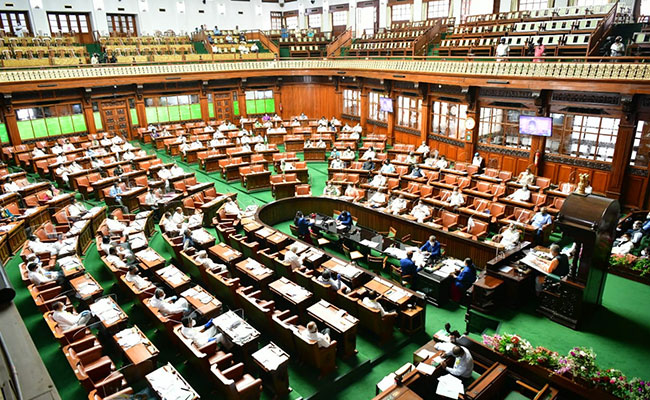 The Karnataka Congress has threatened boycott of both Houses in the Assembly unless Panchayati Raj Minister KS Eshwarappa is charged with sedition, or faces action, for saying a saffron flag could become India’s national flag some day and that it could be raised from the ramparts of the Red Fort.

State unit boss DK Shivakumar ripped into the minister, calling him a “thug” and demanding he be sacked by Chief Minister Basavaraj Bommai and that a case be registered against him.

“This BJP minister is a thug…the image of the country is at stake. They want to replace the national flag… it is against the law of the country. Still the Governor has not sacked (the minister), Chief Minister has not sacked, and there is no sedition case…” he told reporters today.

“We demand his resignation and that a case be registered. We will sleep in the Assembly overnight and (occupy) whole day (tomorrow) if needed,” Mr Shivakumar declared.

The Congress had earlier given the BJP a deadline of Thursday 11 am to act.

Leader of the Opposition Siddaramaiah tweeted late last night and slammed the BJP (and its ideological mentor, the RSS) for having “never accepted our Constitution or national flag“.

“God, religion, patriotism, the national flag (and) national song are all political weapons for the BJP… They have always spoken against our Constitution and national flag…” he posted.

He also claimed the minister’s comment was “not just his personal opinion but also a strong opinion of BJP… starting from Prime Minister Narendra Modi” and tagged the Prime Minister’s account.

.@ikseshwarappa‘s statement is not just his personal opinion but also a strong opinion of @BJP4Karnataka & @RSSorg.

“The issue would not have come up if KS Eshwarappa had condemned the action of students who hoisted saffron flag in place of the national flag and ordered action against those students. Instead he instigated by saying ‘saffron flag will be hoisted at Red Fort one day’,” Mr Siddaramaiah said.

.@BJP4India has slapped sedition charges against those who criticize the functioning of govt.

But it is unfortunate & surprising to see that no action has been taken against @ikseshwarappa who has made anti-national comments.#ದೇಶದ್ರೋಹಿಈಶ್ವರಪ್ಪ

He also pointed out the BJP was quick to file similar sedition charges against those who criticised it. “… no action has been taken against Eshwarappa, who made anti-national comments,” he said.

Furore over Mr Eshwarappa’s comment – which were explained away by the Chief Minister as “he did not say saffron flag would be hoisted immediately but in 300 or 500 years” – come in the wake of controversy over the state barring Muslim students from wearing a hijab in classrooms.

Last week right-wing groups protesting the students’ fundamental right to practice their religion made headlines after a group of boys in Shivamogga cheered as a saffron flag was flown on campus.

After that incident Mr Eshwarappa had said: “Not today but maybe after 100, 200, or 500 years, the saffron flag may become the national flag. People used to laugh over the construction of the Ram temple in Ayodhya. Are we not building the temple now?”

With input from ANI