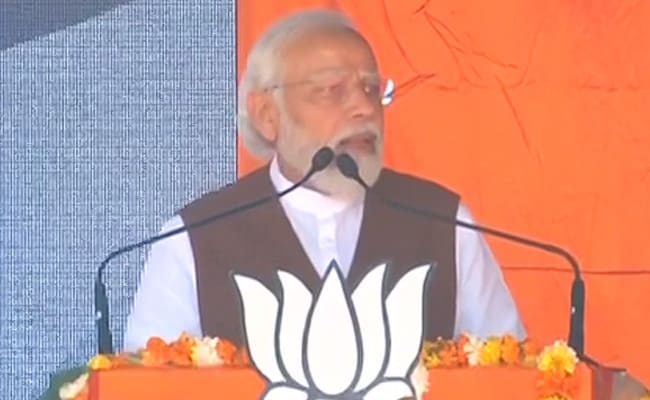 “What the Congress Chief Minister said here the entire country has seen. The family from Delhi is his maalik (boss), that maalik was standing next to him, clapping,” PM Modi said at a rally in Punjab ahead of the Sunday election in the state.

“Where was Guru Govind Singh born? In Patna Sahib, in Bihar. Will you throw Guru Govind Singh out of Punjab? People of such divisive mentality should not be allowed to rule Punjab even for one moment,” said the Prime Minister.

“Only yesterday we observed Sant Ravidas Jayanti. Where was he born? In Uttar Pradesh, in Varanasi. Will you remove Sant Ravidas from Punjab?” asked the PM.

Mr Channi made the comment during a roadshow yesterday, while he was campaigning with Priyanka Gandhi.

“Priyanka Gandhi is Punjab’s daughter-in-law, she is the bahu of Punjabis. Uttar Pradesh, Bihar, Delhi ke bhaiye cannot come here and rule. We will not allow UP bhaiyas to stray into Punjab,” Mr Channi had said.

The comments were seen to aim partly at Delhi Chief Minister Arvind Kejriwal, who has been campaigning extensively in Punjab for his Aam Aadmi Party (AAP).

“It is very shameful. We strongly condemn comments aimed at any individual or any particular community,” Mr Kejriwal said.