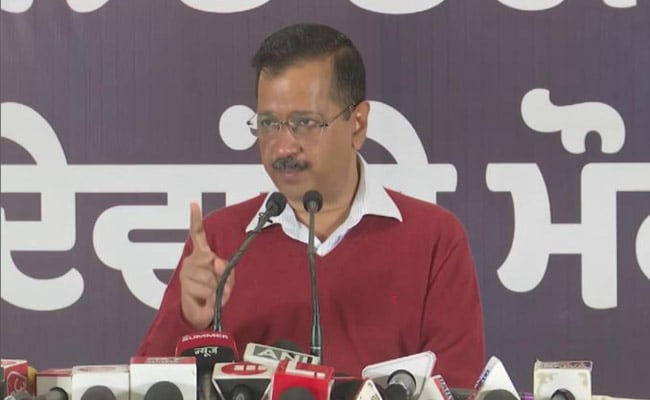 “This time we have to vote to save Punjab. Vote for the better future of your children,” he said.

AAP national convener Arvind Kejriwal on Friday appealed to people to give his party a chance to form an “honest” government in Punjab and take the state on the path of development.

On the last day of campaigning for the February 20 assembly polls, he claimed the AAP’s rivals have joined hands to defeat it but the people of Punjab have made up their minds to bring his party to power.

“They have been looting Punjab for the last 70 years and want to continue it. All of them have united to stop AAP because they are afraid that if the party forms government in Punjab it will put a stop to all such practices forever,” Mr Kejriwal said.

He appealed to the people to “get together and put an end to their politics of loot and corruption”.

“The AAP will come to power and an honest government will be formed in Punjab. The loot of resources is about to end. Punjab’s money will now be spent on the people of the state,” the Delhi Chief Minister said.

“This time we have to vote to save Punjab. Vote for the better future of your children. Vote to end corruption and mafia from Punjab,” he added.

Mr Kejriwal campaigned for party candidates in Jalalabad and Abohar constituencies. Sukhbir Singh Badal is the SAD candidate in Jalalabad.

He said his party aims to build good schools and hospitals, eliminate drug menace corruption and mafia, and provide education and employment.

“On the other hand, the aim of our opponents is only to defeat us,” he said. Interacting with reporters in Chandigarh, AAP’s Punjab affairs co-incharge and Delhi MLA Raghav Chadha claimed that his party ran an issues-based positive election campaign in Punjab.

It came out with a roadmap on how to take the state forward if the AAP comes to power, he said.

“On the other hand the Shiromani Akali Dal, Bharatiya Janata Party and the Congress spread false propaganda against Arvind Kejriwal, Bhagwant Mann and the AAP,” Chadha said.