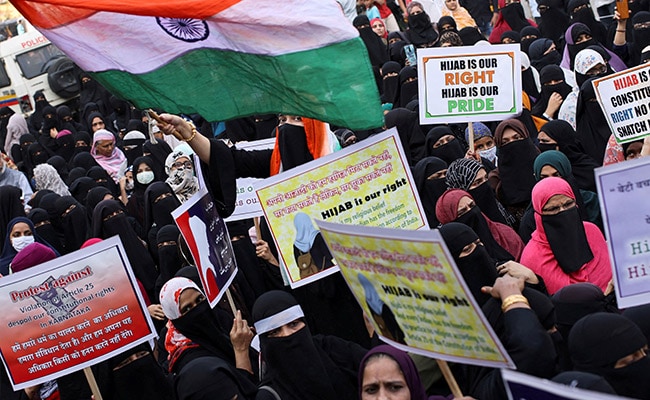 Karnataka and other parts of India have seen protests over hijab ban in classrooms. (File)

Hijab is not an essential religious practice of Islam and preventing its use does not violate the constitutional guarantee of religious freedom, the Karnataka government contended before the high court on Friday.

“We have taken a stand that wearing hijab is not an essential religious part of Islam,” Advocate General of Karnataka Prabhuling Navadgi told the full bench of the High Court comprising Justice Ritu Raj Awasthi, Justice JM Khazi and Justice Krishna M Dixit.

The Advocate General also contended that the February 5 order of the state government was in accordance with the law and there was nothing to object in it.

However, he admitted that the portion prescribing clothes “in consonance with unity and equality” could been worded better.

“Here the draftsman went a bit enthusiastic. What was meant was, in case no uniform is prescribed, please wear decent clothes. I agree it could have been worded better,” he said.

The top state government lawyer also rejected the charge of some Muslim students, who had challenged the Karnataka government’s order on February 5 banning students from wearing the hijab or saffron scarves saying that it violated Article 25 of the Constitution.

Article 25 gives freedom of conscience and free profession, practice and propagation of religion to the citizens of India.

The government order also does not violate Article 19(1)(a) of the Constitution, Mr Navadgi argued.

Article 19(1)(a) guarantees to all its citizens the right to freedom of speech and expression.

The High Court, in its interim order pending consideration of all petitions related to the hijab row, last week restrained all the students from wearing saffron shawls, scarves, hijab and any religious flag within the classroom.