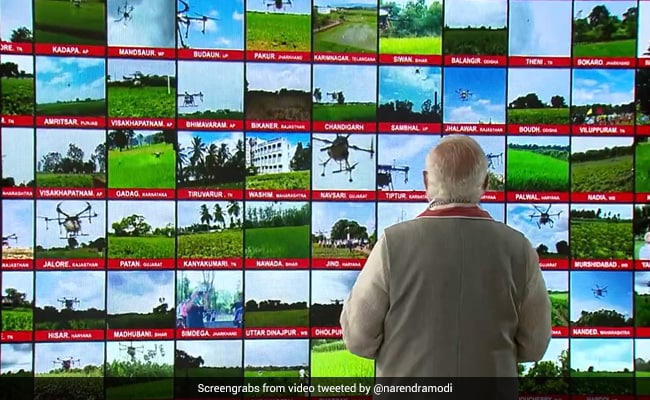 PM Modi said a new culture of drone start-ups is getting ready in India.

Prime Minister Narendra Modi expressed confidence that India’s rising capability in the drone sector will give the world a new leadership, as he flagged off 100 ‘kisan drones’ in different parts of the country for spraying pesticides and other farm materials.

PM Modi launched the drones on Friday with officials describing it as a “very novel and exciting initiative” for farmers.

In his speech, the prime minister said a new culture of drone start-ups is getting ready in India. Their numbers will soon be in thousands from over 200 now, leading to the generation of employment opportunities on a massive scale.

He said his government will ensure that there is no impediment in the sector’s development and has already undertaken several reforms and policy measures to facilitate its rise.

Glad to have witnessed Kisan Drones in action at 100 places across the country. This is a commendable initiative by a vibrant start-up, @garuda_india.

This is an example of how high the country can fly if policies are right, Modi said, noting that drones were mostly associated with the defence sector until a few years back.

This is a new chapter in providing modern farming facilities in the 21st century, and not only will it prove to be a milestone in the development of the drone sector but also open infinite possibilities, he said.

The prime minister said his government did not waste time on apprehensions about opening up the drone sector but trusted India’s young talent and moved ahead with a new mindset. He said his government has given priority to technology and innovations in the Budget and policy measures.

Noting that drones have diverse usages, Modi said, they have been used in the ‘Swamitva Yojana’ aimed at creating a record of land ownership in villages and transporting medicines and vaccines.

He said ‘kisan drones’ are the beginning of a new revolution. Farmers can use high-capacity drones in the coming times to transport their produce like fruits, vegetables and flowers to markets in a minimal time, boosting their income.