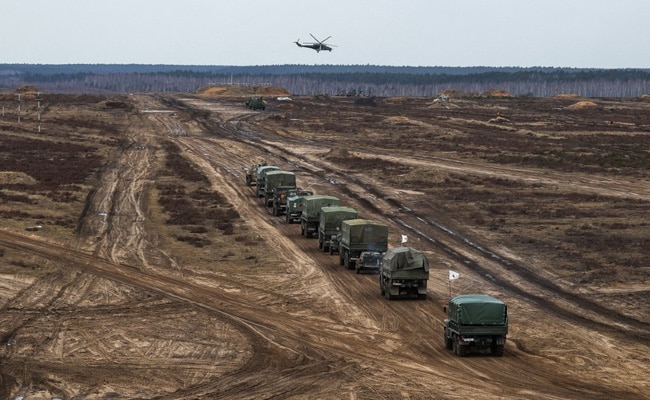 Aggressive military action has already begun in and around Ukraine (Reuters)

In a phone conversation lasting 105 minutes, they also agreed on “the need to favour a diplomatic solution to the ongoing crisis and to do everything to achieve one”, the Elysee said, adding that French Foreign Minister Jean-Yves Le Drian and his Russian counterpart Sergei Lavrov would meet “in the coming days”.

Putin and Macron said they would work “intensely” to allow the Trilateral Contact Group, which includes Ukraine, Russia and the OSCE, to meet “in the next few hours with the aim of getting all interested parties to commit to a ceasefire at the contact line” in eastern Ukraine where government troops and pro-Russian separatists are facing each other.

Macron and Putin also agreed that talks between Russia, Ukraine, France and Germany should resume to implement the so-called Minsk protocol which in 2014 had already called for a ceasefire in eastern Ukraine.

Both also agreed to work towards “a high-level meeting with the aim of defining a new peace and security order in Europe”, Macron’s office said.

US President Joe Biden is also willing to meet Russia’s Vladimir Putin “at any time” to prevent a war in Ukraine, according to his top diplomat who said Sunday Russia appeared on the verge of invading its neighbor.

In a rapid-fire round of US talk shows, Secretary of State Antony Blinken told CNN “everything we’re seeing suggests that this is dead serious, that we are on the brink of an invasion.”

Aggressive military action has already begun in and around Ukraine, which is facing increased shelling from Russian-backed separatist rebels and a force of what Blinken and Western capitals say is more than 150,000 Russian troops on its borders.

“But until the tanks are actually rolling and the planes are flying, we will use every opportunity and every minute we have to see if diplomacy can still dissuade President Putin from carrying this forward,” Blinken said.

He told CBS’s “Face the Nation” Biden has made “very clear that he’s prepared to meet President Putin at any time, in any format, if that can help prevent a war.”

The two leaders last spoke by telephone on February 12, according to the White House.

In Ukraine, more bombardments were heard by AFP reporters overnight close to the frontline between government forces and the Moscow-backed rebels who hold parts of the districts of Lugansk and Donetsk.

And in Belarus, which borders both Russia and Ukraine, Russian military exercises were continuing, Minsk announced Sunday, further ramping up the pressure on an already tense situation.

Blinken said that was just one of several signs that Moscow is gearing up for an invasion, with Putin “following the script almost to the letter.”

“It tells us that the playbook that we laid out, I laid out at the UN Security Council last week, about Russia trying to create a series of provocations as justifications for aggression against Ukraine, is going forward,” Blinken said.

Biden was hosting a rare weekend meeting of his National Security Council on Sunday to address the Ukraine crisis.

“We still sincerely hope that there is a diplomatic path out of this moment,” Harris said, although she acknowledged that such a window is “absolutely narrowing.”

“We are talking about the real possibility of war in Europe,” she said.