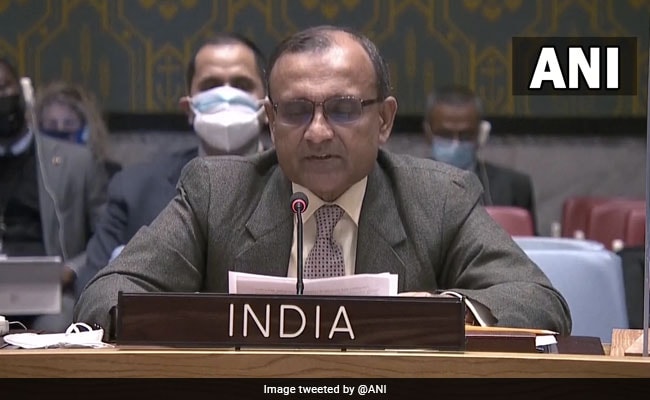 India today said that the escalations of tensions between Russia and Ukraine were a matter of great concern. At a emergency meeting called by the United Nations Security Council, India said that the immediate priority should be deescalation of the Russia-Ukraine crisis.

“We need to give space to the recent initiatives undertaken by parties which seek to diffuse tensions. In this context, we welcome the intense efforts underway, including through the Trilateral Contact Group and under the Normandy format. We need Parties to exert greater efforts to bridge divergent interests. We cannot afford to have a military escalation,” TS Tirumurti, India’s Permanent Representative to United Nations, said at the UN Security Council Meeting.

“The escalation of tension along the border of Ukraine with the Russian Federation is a matter of deep concern. These developments have the potential to undermine peace and security of the region,” Mr Tirumurti added.

India also emphasised that it was concerned about the safety and security of civilians.

“Safety and security of civilians essential. More than 20,000 Indian students and nationals live and study in different parts of Ukraine, including in its border areas. The well-being of Indians is of priority to us,” Mr Tirumurti said.

India asked all sides to intensify diplomatic efforts to reach for an amicable solution at the earliest.

“In conclusion, we strongly emphasize the vital need for all sides to maintain international peace and security by exercising the utmost restraint and intensifying diplomatic efforts to ensure that a mutually amicable solution is arrived at the earliest,” Mr Tirumurti said.