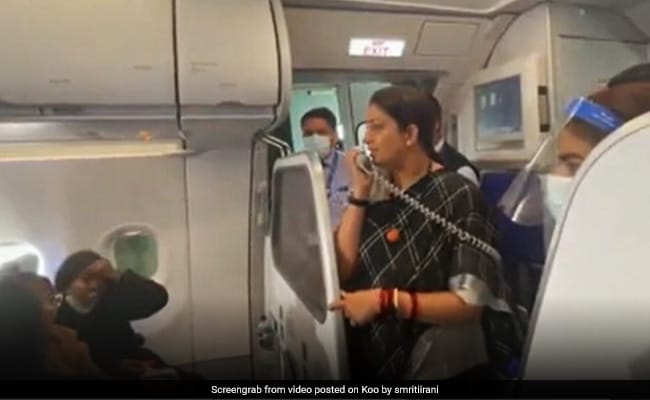 “I am grateful for your resilience, for your courage and patience,” Smriti Irani told evacuated Indians.

As Indian nationals from war-torn Ukraine return home through special flights arranged as part of Operation Ganga – India’s evacuation mission for its nationals stranded amidst a raging war – several Union Ministers were today seen welcoming them on their landing and raising slogans of “Bharat Mata Ki Jai (Long live mother India)” and “Vande Mataram (Praise to the motherland)”. This grand welcome comes at a time when the Indian government is facing bitter criticism from opposition parties and many citizens following the killing of an Indian student by Russian shelling in Kharkiv yesterday. Videos of stranded Indian students criticising Indian embassy officials for being unresponsive and of parents and friends desperately pleading for help have flooded social media as Russia escalates its attack on the former Soviet republic.

In a video tweeted by news agency ANI, Minister Smriti Irani can be seen welcoming the students inside an IndiGo airlines aircraft. Speaking into the public address system, she says the evacuated Indians have shown “exemplary courage” in the “most challenging of times”.

“I am grateful for your resilience, for your courage and patience,” she says and leads the slogans of “Bharat Mata Ki Jai“. She also thanks the airlines crew for their service.

Another video by the news agency shows Union Minister Dr Jitendra Singh can be seen interacting with students who are holding a big Indian flag. He reassures students that there’s no need to worry and that Prime Minister Narendra Modi is making all efforts to bring back other students as well. He then welcomes them with roses and encourages them to chant “Bharat Mata ki Jai“.

On the microblogging website Koo, Minister General VK Singh has posted a similar video of him speaking to students inside an aircraft where students chant “Vande Mataram“. General Singh is one of four Union Ministers tasked by the government with travelling to Ukraine’s neighbouring countries to personally oversee the evacuation of stranded Indians.

Minister Hardeep Singh Puri, another of the four ministers who flew to Ukraine’s bordering nations to oversee evacuations, posted a video on his Twitter account where he can be seen interacting with students. “Thank God you all are well,” he tells a smiling crowd. He claimed that “no other country in the world does this,” presumably referring to India’s evacuation efforts. “No matter where somebody is, the Prime Minister is committed to taking each one of you,” he says, adding that External Affairs Minister Dr S Jaishankar is personally monitoring the evacuation efforts.

Delighted to interact with this undaunted bunch of youngsters from all parts of India who held their nerves even in the most difficult circumstances & will shortly board the flight back home. I am happy for them & their parents. #OperationGanga#indianstudents@opganga@MEAIndiapic.twitter.com/lEdx8T9zUs

Not just Ministers, even pilots and cabin crew involved in the evacuations have praised their passengers for their strength and resilience. In a video from ANI, a SpiceJet airline pilot flying Indians from Budapest can be seen praising them for their “courage and determination”.

“It’s time to go back to our motherland. It’s time to go home,” he says and ends with “Jai Hind (Long Live India)”, to which the passengers respond with “Bharat Mata Ki Jai” and “Vande Mataram“.

#WATCH “It’s time to go back to our motherland, our home…,” says the pilot of a special flight carrying Indians stranded in Ukraine from Budapest to Delhi pic.twitter.com/likhrimPSI

On developments regarding Operation Ganga, Foreign Minister S Jaishankar said that six flights have now departed for India in the last 24 hours, including the first flights from Poland. “Carried back 1377 more Indian nationals from Ukraine,” he said on Twitter.