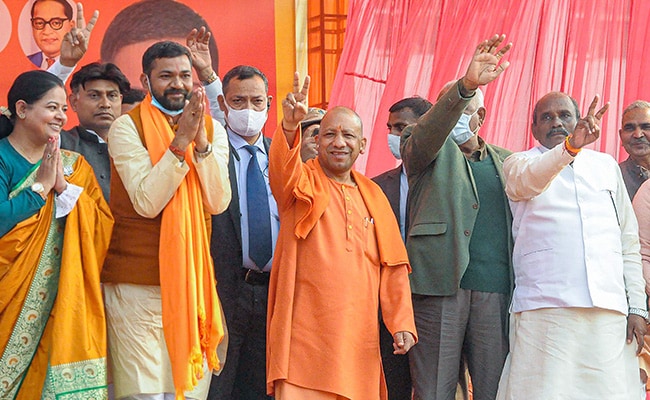 The swearing-in ceremony date will also be discussed during the meeting. (File)

Days after the BJP retained power for the second consecutive term in Uttar Pradesh, Chief Minister Yogi Adityanath is scheduled to visit Delhi on Sunday to discuss the new cabinet with Prime Minister Narendra Modi.

National President JP Nadda, Amit Shah and BL Santosh in Delhi will be present at the meeting. The swearing-in ceremony date will also be discussed during the meeting.

It is being speculated that the BJP leadership has prepared a basic list of probable Deputy Chief Ministers and Ministers on the basis of qualification, caste and regional equations because BJP gives place to every caste in its cabinet. The Central leadership will have the final say on the list.

Baby Rani Maurya has been the Governor of Uttarakhand and is a well-known face of Jatav society in Uttar Pradesh. Brijesh Pathak, of the Brahmin community, has been a law minister in the Uttar Pradesh government. UP BJP chief Swatantra Dev Singh, who is also a Kurmi leader, was one of the prominent faces behind BJP’s big win in Uttar Pradesh.

Law Minister Brijesh Pathak, who won from Lucknow Cantonment seat, may get the role of Deputy Chief Minister in the Yogi government to maintain the Brahmin equation.

In Yogi Sarkar 2, the leadership is also considering the inclusion of two former police officers in the new cabinet- Rajeshwar Singh and Asim Arun.

Many Bharatiya Janata Party leaders have won by a huge margin of votes. In this, the candidate from the Noida Assembly seat and Union Defense Minister Rajnath Singh’s son Pankaj Singh has won by a margin of 1,81,513 votes.

Shalabh Mani Tripathi, a Brahmin young face close to Yogi and an experienced journalist, can be made a minister in the Yogi cabinet. Shalabh has also been in ABVP earlier.

Allies Apna Dal and Nishad Party would also get a place in the Cabinet-MLC Ashish Patel and Sanjay Nishad can get important roles to play.

Besides the new faces, old leaders like Suresh Khanna, who won with a landslide victory from the Shahjahanpur seat for the ninth consecutive time, can also be made a minister.

Brijesh Pathak and Keshav Prasad Maurya can also be part of the cabinet again.

The swearing-in of the Yogi government is likely to be held on March 15 or 21.

Adityanath on Friday tendered his resignation to Governor Anandiben Patel at the Raj Bhavan in Lucknow.

Following the massive victory in the Uttar Pradesh Assembly elections, Adityanath on Friday held a meeting with his ministerial colleagues at the party office in Lucknow. Adityanath, a monk-turned-politician, won his first-ever Assembly election by a margin of 1,03,390 from Gorakhpur Urban constituency, defeating the Samajwadi Party candidate Subhawati Upendra Dutt Shukla, who secured 62,109 votes in the recently-concluded UP Assembly elections. Adityanath will be the first Chief Minister in the last 37 years to return to power after completing a full term in the state.