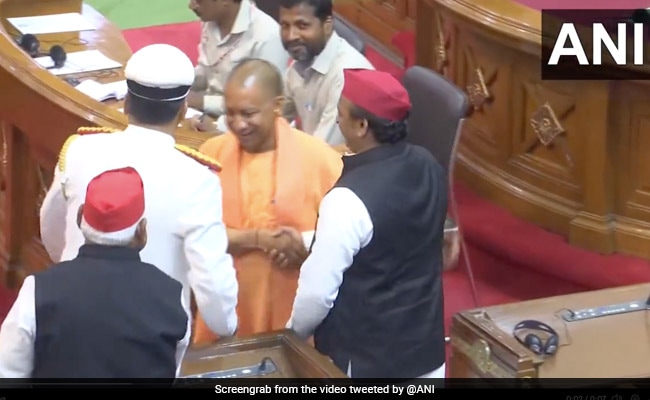 The Uttar Pradesh Assembly today witnessed a rare moment of political bonhomie between Chief Minister Yogi Adityanath and Samajwadi Party president Akhilesh Yadav, who is set to be named the Leader of the Opposition.

The meeting between the two leaders came weeks after they traded loaded barbs during a high-decibel political campaign and the BJP’s historic return to power.

A video shared by news agency ANI showed the Chief Minister and Mr Yadav, who was his prime challenger in this election, greet each other and shake hands on the floor of the House. The Chief Minister is seen patting Mr Yadav on his shoulder before moving on.

The run-up to the elections saw a caustic war of words between the two leaders. In one of the remarks that made headlines, Mr Yadav referred to the Chief Minister as “Baba Bulldozer” – a swipe at his government’s anti-eviction drives. Mr Adityanath pulled no punches either. Taking a swipe, he said Mr Yadav will remain a “babua” – meaning he will always be juvenile and childish.