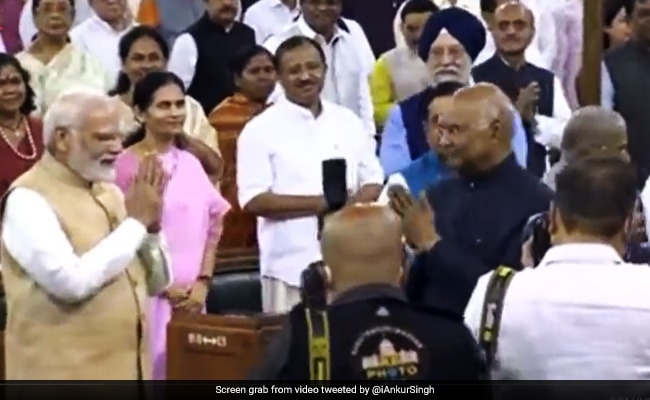 A video tweeted by an Aam Aadmi Party leader suggesting Prime Minister Narendra Modi is looking at the cameras while President Ram Nath Kovind is seen greeting him has been called out by Twitter for being misleading.

In the original video, the Prime Minister can be seen returning the President’s greeting and looking at him. However, the cropped video omits that part.

AAP edited that part and starts video after he crossed Modiji. https://t.co/uYFhBWsFJSpic.twitter.com/LKLZ4kYmqT

The incident is from a ceremony at parliament’s Central Hall to bid farewell to President Kovind.

BJP spokesperson Shehzad Poonawalla said that PM Modi had greeted President Kovind which could be seen in the complete video of the Parliament, as against the video shared by Sanjay Singh on Twitter.

“Sanjay Singh tweeted today in which he said that the outgoing president was insulted. There could not be anything more unfortunate than this. He posted an edited clip and levels allegations against the Prime Minister at such an event on which there should not be any politics. The edited clip was shared. The Prime Minister had greeted President Kovind which could be seen in the full video. There are pictures in the public domain showing PM Modi greeting the President. Still, such an allegation was levelled. What was the intention?” asked Mr Poonawalla.

“Aam Aadmi Party has been exposed. They have come down to insulting the Prime Minister. They have hijacked Delhi,” he added.

The President, who is the first Dalit to occupy the top post, mentioned PM Modi visiting his UP village in his last televised address to the nation today, underscoring the mutual respect between the two top leaders of the country.

“This year, the prime minister also honoured my village Paraunkh with his visit. This connection with our roots has been the essence of India. I would request the younger generation to continue this tradition of staying connected with their village or town, their schools and teachers,” the President said.

Mr Singh’s post comes on the day the AAP alleged that a Delhi government event was “hijacked” on orders of Prime Minister’s Office by the police who put up his towering photos on stage and threatened to arrest anyone who removed them.

The AAP leader’s video has racked up 10,000 likes and has been tweeted widely.