Bengal SSC scam: Partha Chatterjee is back in Kolkata, will be questioned by ED

Partha Chatterjee, a minister in Mamata Banerjee’s government in West Bengal, has been brought back to Kolkata this morning for questioning by the Enforcement Directorate, a day after he was flown to Odisha’s capital Bhubaneshwar for a medical check-up.

The doctors at AIIMS Bhubaneshwar, however, cleared Mr Chatterjee – at whose aide Arpita Mukherjee’s home a room full of cash worth Rs 20 crore was found last week – as someone with chronic health issues but who doesn’t need a hospital stay.

After he was arrested on Saturday last week, Mr Chatterjee had gone the state government-run SSKM Hospital in Kolkata for a health check-up and got some tests done. During a bail hearing, the investigators alleged the Bengal minister of trying to play the illness card to evade questioning. Even the Calcutta High Court in a stern order said it would not be difficult for Mr Chatterjee, given “immense power and position”, to “evade interrogation”.

Mr Chatterjee’s lawyer said SSKM Hospital would have given the same medical report as AIIMS Bhubaneswar, and the Enforcement Directorate is responsible for the air ambulance and related expenses.

Chief Minister Mamata Banerjee yesterday attacked the BJP over why the minister had to be taken to the All-India Institute of Medical Sciences, or AIIMS, in Bhubaneswar when he could have been given the same treatment in Kolkata.

Ms Banerjee said the probe agency wanted to shift the minister to Bhubaneswar to use the centre’s influence. Slamming the move, she said, “I was ashamed. They said they had to take him to Odisha for treatment. SSKM Hospital is one of the best hospitals in the country. We have so many medical colleges and hospitals. We also have good private hospitals. Why do you have to take him to a hospital which has a central government touch? Why ESI Hospital? Why Command Hospital? What is the intention? They say they have to take him to AIIMS in Odisha. Is this not an insult to the people of Bengal? What do you think? Is the centre innocent and the states are all thieves? You are there because of the states.” 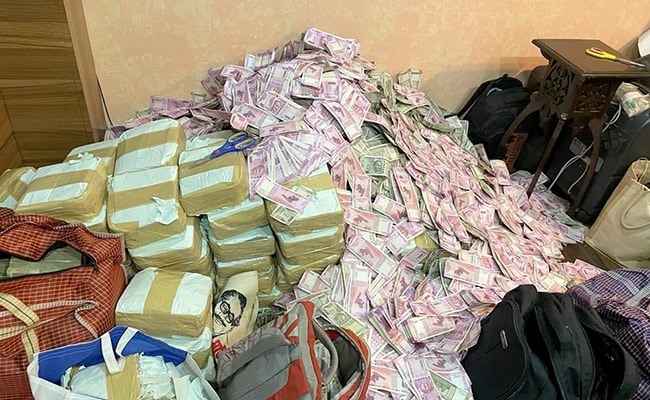 Bengal SSC scam: Rs 20 crore cash was found during a raid at the home of Arpita Mukherjee, the aide of arrested West Bengal Minister Partha Chatterjee.

The Enforcement Directorate will question Mr Chatterjee at their Kolkata office starting today. The high court has told the investigators to check the health of the minister and his aide, Ms Mukherjee, every 48 hours while in custody.

Ms Mukherjee can’t be interrogated between 9 pm and 6 am, and a woman officer must always remain with her during questioning “with strict regard to decency”, the court had ordered.

The central probe agency can keep the minister and his aide in their custody till August 3.

Ms Banerjee spoke on the matter after a buzz on Monday morning that Mr Chatterjee’s calls to her after his arrest had all gone unanswered. It was seen as the Chief Minister’s attempt to distance herself from the minister, one of her top aides who is now battling corruption allegations.

The alleged scam happened when Mr Chatterjee was Bengal Education Minister. A small-time actor, Arpita Mukherjee, was the face of promotional campaigns for Mr Chatterjee’s Durga Puja committee in 2019 and 2020 before her name surfaced during investigation into the School Service Commission, or SSC scam.