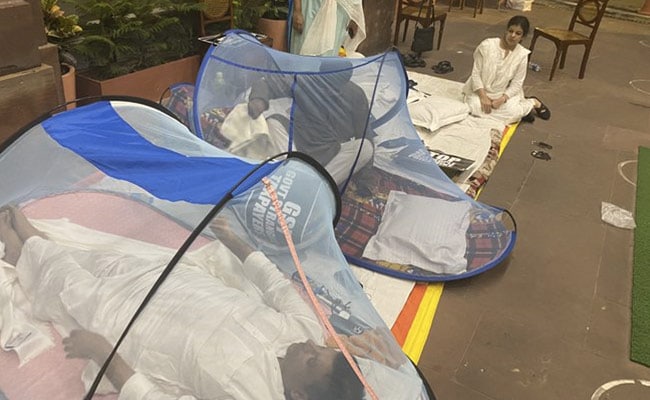 The Opposition has chosen the entrance of the Parliament for its 50-hour protest against the suspension of MPs. On Wednesday, five MPs had announced that they would stage a sit-in protest outside the parliament. Several Opposition leaders shared photos of the MPs’ second night under the sky. In the pictures, the MPs can be seen sleeping in mosquito nets.

Trinamool MP Derek O’Brien, in a tweet at 1 am, urged the Parliament to revoke the suspension of 27 MPs who were suspended for seeking a discussion on price rise.

“Update. It’s one in the morning. #Parliament 29 July. Pic from dharna site. Non stop day-night 50 hr dharna still on. 12 hours to go. Revoke suspension of 27 MPs who were suspended for seeking a discussion on #PriceRise (sic),” Derek O’Brien wrote. 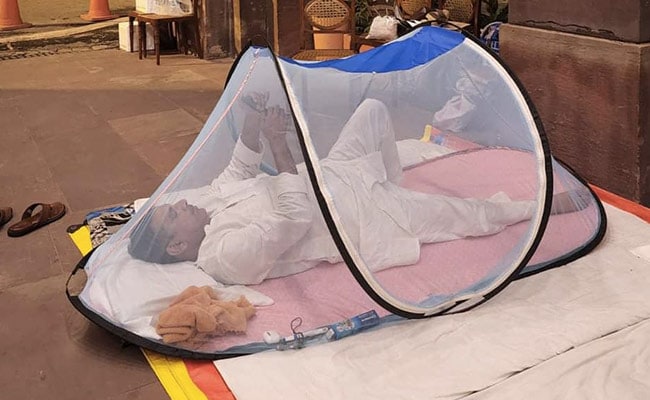 The protest was later shifted to the Parliament entrance amid heavy rains.

Due to heavy rain,50hr dharna has moved from Gandhi statue to #Parliament main entrance

The MPs who spent the night outside the Parliament were Aam Aadmi Party (AAP) leader Sanjay Singh, Trinamool Congress leaders Santanu Sen, Dola Sen, Abir Ranjan Biswas, and Derek O’Brien as well as the TRS’s Ravichandra Vaddiraju. Some leaders from the DMK and Left parties were also part of the group.

Yesterday, the MPs were provided lunch of idli by the DMK while the Trinamool served them fish fry and tandoori chicken. This generated controversy with BJP spokesperson Shehzad Poonawala objecting to non-vegetarian food being served in front of the Gandhi statue.