Jharkhand Chief Minister Hemant Soren has minced no word in attacking the BJP for allegedly working in the shadows to destabilise his government, which is in an alliance with the Congress.

Mr Soren’s Jharkhand Mukti Morcha, or JMM, has been attacking the BJP ever since three Jharkhand Congress MLAs were arrested with Rs 48 lakh in cash in West Bengal’s Howrah last month, which the Congress alleged was money paid to the MLAs to topple the Jharkhand government. The BJP has denied these allegations, while the MLAs have said the money was for sari shopping.

“Our alliance partner has indicated that something is going on. We have taken note of their concern and we are analysing it. Their (Congress MLAs) behaviour seems to have changed in the last three days in the assembly. There is every indication to distract the government,” Mr Soren told NDTV in an interview.

“This is definitely a thing of concern that today three leaders have been arrested. We have always suspected a conspiracy. We are following closely. Let’s see, if you wait long enough, you might find whatever is happening is linked to the BJP,” the Chief Minister told NDTV. 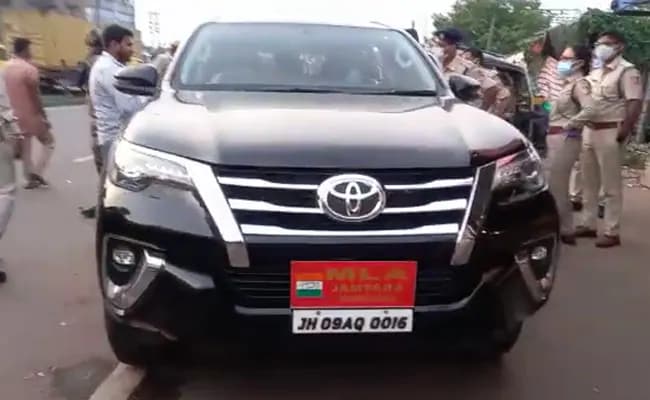 The SUV with the board ‘Jamtara MLA’ in which the MLAs were travelling with the cash, as per police.

On why he thinks the BJP is coming after him, Mr Soren – after a slight pause – said, “Maybe because we are in the government. They want power. They don’t want anybody else in the country to be in power. We will see how to save the government if it comes to that. The people gave us the mandate. We will always protect their interest.”

On whether he can fight the BJP’s onslaught, Mr Soren said, “Who do you think I fought against to reach here, to be on this seat? It’s not like they (BJP) were weak then and they have gained strength now. Nothing like that. We fought them and reached here.”

The Chief Minister said saving the JMM-Congress alliance “needs cooperation of the alliance partner”, adding, “I will do everything I can.”

Mr Soren blamed the opposition BJP of trying to muddy political waters in the state with using outright unfair means. “There is a saying for children. When a child loses in a game, the angry child leaves the game after ruining it for everyone. When the opposition party is unable to win in a proper electoral fight, they will turn to all kinds of mischief to come to power. But you will see, the truth can’t be hidden. Everything will come out.”

To a question if he is scared of the BJP, Mr Soren told NDTV, “Strange question. What do you mean, aren’t you scared? It’s not like they are going to gobble me up. It’s not about getting scared or not scared, it’s about showing political power, about who can have the maximum people’s mandate. There is no need to be scared of anyone.”

The arrests of the three Congress MLAs, now suspended by the party – Irfan Ansari, Rajesh Kacchap and Naman Bixal Kongari – have ignited politics across three states and multiple parties. The Congress has also alleged that the BJP – specifically, Assam Chief Minister Himanta Biswa Sarma – is behind the money “paid to the MLAs to topple the Jharkhand government”.

Mr Sarma has hit back at the Congress, calling the allegations baseless, after a police case was filed against the three MLAs. The Assam Chief Minister said the Congress filing a police case against its own MLAs was like asking Ottavio Quattrocchi to file a case against Bofors. Italian businessman Ottavio Quattrocchi was at the centre of the multi-million dollar Bofors scam, which scalded the political careers of many leaders including former Prime Minister Rajiv Gandhi.

In Jharkhand’s 82-member assembly, JMM has 30 and Congress 17 MLAs, and they enjoy support of some others. The BJP has 25 MLAs.