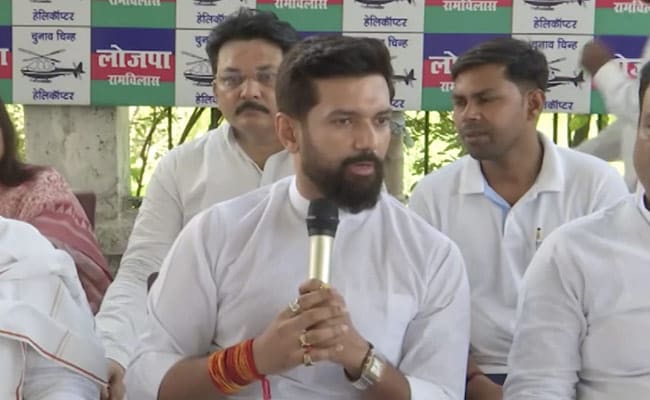 Chirag Paswan said he is only committed to the model followed by his father Ram Vilas Paswan.

Accused of working with the BJP to weaken Chief Minister Nitish Kumar’s hold over his party, Chirag Paswan, the former chief of Lok Janshakti Party, today hit out, saying that Mr Kumar should be “scared from those within his party”.

“Nitish Kumar’s presence hardly helped his party in the 2020 elections. Isn’t he part of the Chirag model. Janta Dal (United) is no longer United, but divided. What kind of language did their national president use against Chief Minister Nitish Kumar? The Chief Minister should not be scared of “Chirag model”, but from members within his party,” Mr Paswan said.

“Those who are advocating for Nitish Kumar, these are the people who are plotting against him. What did Upendra Kushwaha said about Mr Kumar during the assembly elections in 2020? Has the Chief Minister forgotten? Does he only remember the “Chirag model”? Why, because you suffered a debacle because of the “Chirag model”,” Mr Paswan hit back.

The former chief of Lok Janshakti Party said he is only committed to the model followed by his father Ram Vilas Paswan. “What does Nitish Kumar know about Ram Vilas model of development, his Bihar first, Bihari first model. Nitiak Kumar did not leave an opportunity to attack my father,” he added.

He also took a veiled dig at Mr Kumar over his attempts to remain in power, drawing an analogy from the Mahabharata.

“Like Kansa, he is trying to kill every child of Devaki. Look at Sharad Yadavji, George Fernandes. Look how he has conspired against senior leaders in his party. Can the people forget all this. What did he do to Prashant Kishor,” Mr Paswan said.

Mr Paswan’s reply came after JD(U) president Rajiv Ranjan Singh alias Lalan accused him for party’s poor show in the 2020 assembly polls. Lalan Singh said that in 2020, at the time of Bihar election, the BJP deployed the “Chirag model” to ensure that Nitish Kumar’s votes were split and this led to his party winning just 43 of the state’s 243 parliamentary seats.

Though the BJP has made an attempt at a rapprochement, sources close to the Chief Minister say he’s not in any mood to be placated. Tomorrow, Mr Kumar will meet with all his MLAs or legislators to decide on what happens next.

Early reading has reportedly convinced him that MLAs are not willing to face mid-term elections and would prefer a new alliance over that prospect.