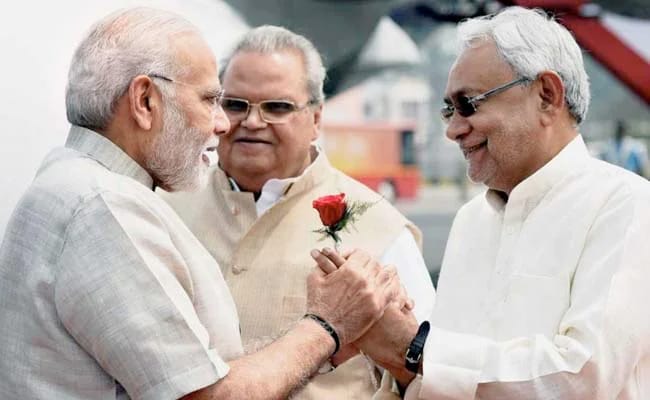 Like Uddhav Thackeray, Nitish Kumar is a regional leader attempting to preserve his turf

Built-in to Nitish Kumar’s crisis with the BJP is his overwhelming concern that his ally is working to pink slip him, said sources close to the Chief Minister.

Nitish Kumar’s aides claim his concerns are not paranoia. They point to the recent remarks of BJP chief JP Nadda that regional parties “will not survive” as proof that the PM’s party seeks to first diminish and then eliminate its allies. “You saw JP Nadda’s remark stating that all regional parties will be replaced by the BJP. But the BJP has allies like all of us – they should think about that,” said Umesh Kushwaha, a senior leader from Nitish Kumar’s party.

At a meeting this morning with Deputy Chief Minister Tarkishore Prasad, who is from the BJP, Nitish Kumar reportedly said, “There’s nothing serious.” There’s zero chance of anyone taking that at face value.

Nitish Kumar is reportedly convinced that Bihar will become the sequel to Maharashtra, which has just witnessed the removal of Uddhav Thackeray as the head of its government in an exercise that was meticulously planned and implemented by the BJP. Hence, a public attack by his top aide yesterday, accusing the BJP “of working to break our party.”

Like Uddhav Thackeray, Nitish Kumar is a regional leader attempting to preserve his turf and withstand the onslaught of the BJP. In Maharashtra, Uddhav Thackeray’s downfall was powered by the rebellion of a senior leader from his own party, Eknath Shinde. Working closely with the BJP, Ekanth Shinde organized a mega-revolt within the Shiv Sena, one so consequential that apart from having to quit as Chief Minister, Uddhav Thackeray is now fighting in the Supreme Court to have his portion of the party retain its tag as the real Shiv Sena.

But apart from that, Nitish Kumar feels the BJP playbook against allies is being hurled against him. In this, he perceives the dominant hand of Amit Shah, who, he feels, has planted, in their combined government, ministers who are especially close to him. Whether or not it is a conspiracy theory, this is why Nitish Kumar turned on RCP Singh, a senior leader within his own party, the Janata Dal United. In 2021, RCP Singh was chosen by Niish Kumar to represent the Janata Dal United in the union government. Back in Bihar, he was seen as increasingly close to Amit Shah, and, over time, as a man working within Nitish Kumar’s party to foment resentment against the Chief Minister.

Two months ago, Nitish Kumar refused to extend his term in the Rajya Sabha; this meant RCP Singh’s tenure in the Union government ended. It was followed this weekend by RCP Singh being accused by his party of vast corruption; he quit the party on Saturday, levelling charges of vendetta, insecurity, and a long-running desire to eclipse PM Modi, with whom he has always shared an uncomfortable relationship. “Nitish Kumar will not become PM in even seven lives,” RCP Singh declaimed. But Nitish Kumar’s top aide, Rajiv Ranjan Singh or “Lallan” Singh, reasserted today that RCP Singh was taking his cues from the BJP. “When we were asked to provide one union minister,” he said, “RCP Singh said that Amit Shah had told him that only he (RCP) was acceptable. And Nitish Kumar said, ‘If you have decided with them, then go, what do you want me to say?'”