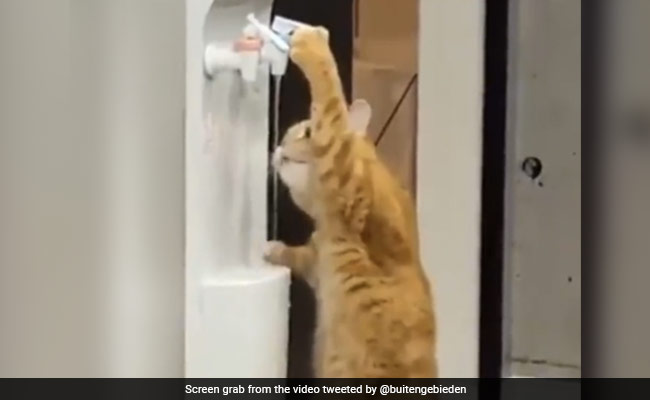 Internet is full of strange as well as surprising content. And videos about animals is intriguing to watch. One such video is gaining traction on the social media that shows a cat drinking water from a water cooler.

Shared by Buitengebieden on Twitter on Wednesday, the caption reads, “Stay hydrated.”

The feline stands next to a water cooler at the beginning of the video and attempts to get water to come out of it. It further uplifts the tab and drinks water gracefully.

Since being shared, the video has amassed over 7.9 million views and more than 2.6 lakh likes on Twitter. More than 38,000 users re-tweeted the post.

“Animals are highly intelligent, so adorable,” a user wrote while replying to the tweet.

Another said, “This is a perfect example of observational learning that cats are champions of! (So are primates and octopuses).”

“Give this kitty a little stool so he doesn’t have to reach quite so much to get the handle. Help keep your friends hydrated,” wrote a third user while sharing the post.

Recently, a video of a monkey giving emotional support to a man went viral on the internet. The widely shared video demonstrated the emotional similarities between human beings and other animals.

They too can’t see humans sad and will do everything in their power to cheer them up. The monkey assisted in consoling the man who was on the verge of breaking down.

The video crossed over 3.4 million views mark and received more than 44,000 likes on Twitter.