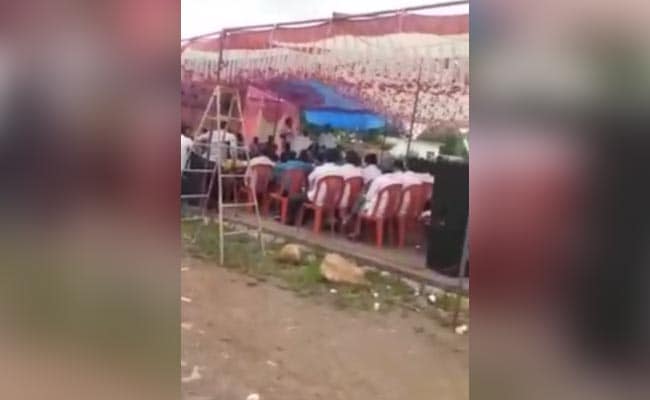 The video of the BJP leader’s controversial remarks is being widely circulated.

The BJP, considered to have upset the Brahmins in Uttar Pradesh, found itself the backfoot with the community in Madhya Pradesh following a leader’s controversial remarks. It has also got two leaders of the ruling party working against each other. Pritam Singh Lodhi is considered a loyalist of the party’s former Chief Minister Uma Bharti. A police case has been filed against him on a complaint by a youth leader of the BJP.

“The Brahmins were fooling and harassing people in the name of offering religious rituals and prayers,” he said. “They were grabbing money and other things from commoners. They (Brahmins) are prospering on our money and resources,” he said after the felicitation.

“Seeing beautiful women from good families, they (the Brahmins) want to have food in the homes of those women. They (Brahmins) want young women seated in the front row and make elderly women sit in the back row,” Mr Lodhi said while addressing the event at Shivpuri’s Kharaih village.

The video of the BJP leader’s controversial remarks is being widely circulated.

Shortly after that, a Brahmin leader of the ruling party’s youth wing, Praveen Mishra, got a police case lodged against Mr Lodhi. He has been accused of promoting enmity between two groups.

“The BJP leader’s public statement is part of his party’s well-planned conspiracy against the Brahmins and other general category people,” said Congress spokesperson KK Mishra.

“In November 2021, the ruling party’s national general secretary in-charge for Madhya Pradesh, P Murlidhar Rao, had said in Bhopal that Brahmins and Baniyas were in his pocket. What Lodhi has said is the extension of Rao’s earlier statements,” he added.

In Uttar Pradesh, the Brahmins are said to be upset with the BJP over the choice to Yogi Adityanath, a Thakur, for the post of the Chief Minister. The party had to make efforts to placate them ahead of the assembly elections held earlier this year.