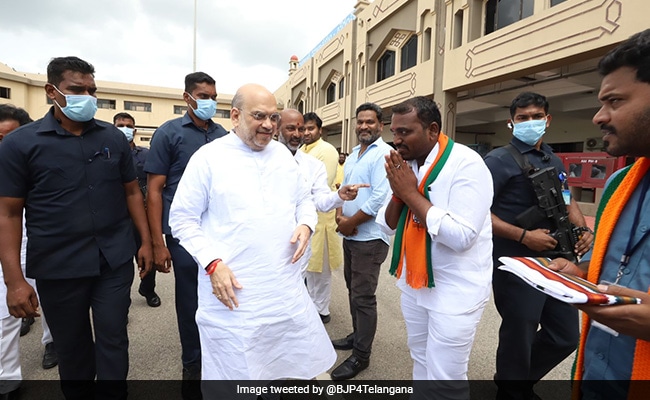 Union minister Amit Shah slammed the K Chandrashekar Rao government in Telangana, declaring that its “countdown has begun”. “We will uproot the KCR government. After the next election there will be a BJP chief minister,” he said at a public meeting in Munugode, around 85 km from Hyderabad, where by-elections are being held.  The by-poll became necessary after the sitting MLA Komatireddy Rajagopal Reddy switched from the Congress to the BJP and resigned.

The BJP has not been able to carve out a niche in any southern state other than Karnataka.

At a public meeting in Munugode yesterday, Chief Minister K Chandrashekar Rao had hit out at the BJP, saying it would stop providing free power to farmers.

This morning, Chief Minister Rao’s son, KT Rama Rao — who is also a minister in the state cabinet, directed a series of jibes at Amit Shah. The first concerned dynastic politics, which the BJP claims not to practice.

“The father of an “Ace cricketer” who rose through the ranks & became BCCI Secretary (purely on merit) is visiting Telangana today. He will campaign for a gentleman whose brother is an MP & whose wife was an MLC contestant And he will lecture & enlighten us on Parivarvad,” Mr Rama Rao tweeted.

In a separate tweet, Mr Rama Rao said the people of Telangana are keen to hear from Amit Shah why the Gujarat government decided to release the 11 rapists of Bilkis Bano.

In the 2009 Andhra Pradesh Assembly elections before the State bifurcation, Jr NTR campaigned for the Telugu Desam Party. Later, he distanced himself from politics to focus on his career in movies.