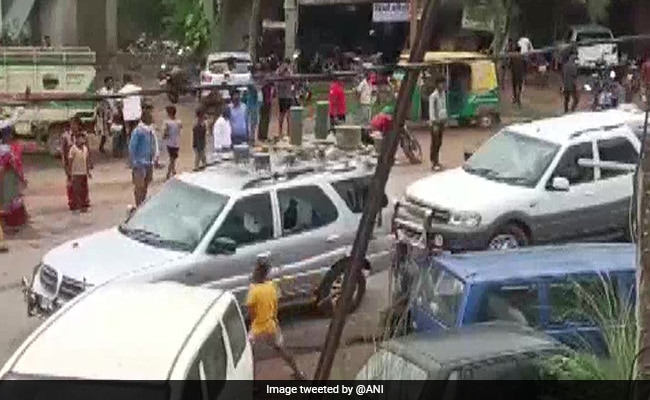 The videos of the attack were widely circulated on the social media.

Bihar chief minister Nitish Kumar’s convoy came under attack today while on way to Gaya. The Chief Minister, who is expected to visit Gaya tomorrow, was not in any of the cars, which were stopped and attacked, sources said. The convoy was being sent in anticipation of his visit.

Videos from the area showed a huge mob blocking the road with burning car tyres and bamboo poles. They stoned the vehicles and broke the windows with rods.

Sources said the locals were agitated after a young man, who had been missing for several days, was found dead.

The man was a resident in a locality under the Gaurichak police station area. The cavalcade reached the Sohgi Mor main road as the family was holding protests with his body.

The videos of the attack, which were widely circulated on the social media, gave the BJP supporters an opportunity to hit out at the new Mahagathbandhan government. Many said it was proof that the days of lawlessness are back in Bihar. Others speculated about a BJP conspiracy.

Mr Kumar had ended his tie-up with the BJP last week and is heading a new government with Tejashwi Yadav’s Rashtriya Janata Dal, the Congress and several other parties.

Needled regularly by state BJP leaders since his party’s lacklustre performance in the 2020 state polls, Mr Kumar decided to end the alliance earlier this month, convinced that Union Home Minister Amit Shah was trying to split the party.

Sources said he felt that the BJP was attempting a repeat of the Maharashtra model – where the Uddhav Thackeray government was dismantled with the rebellion by senior Shiv Sena leader Eknath Shinde who is now the Chief Minister.