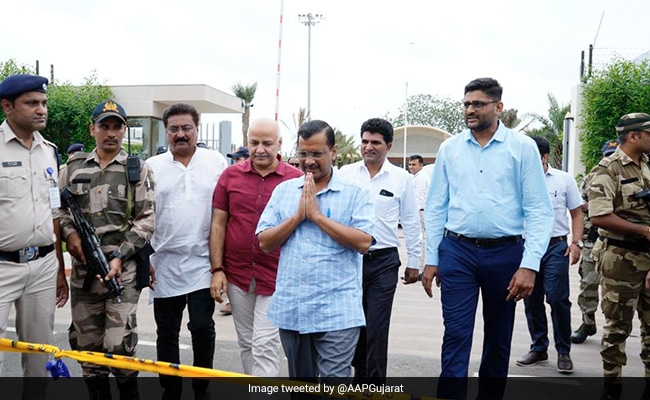 Arvind Kejriwal was accomanied by his deputy Manish Sisodia.

On an audacious mission to trump the BJP in Prime Minister Narendra Modi’s home state, Delhi Chief Minister Arvind Kejriwal on Monday strove hard to play down a direct contest with him, saying he was not angling for the country’s top job.

“We’re not here for such posts. I just want to make India the No. 1 country,” he said, in response to a point-blank question in Gujarat – whether he wanted to be PM – during his fifth visit to the state in less than a month.

Lining up a slew of healthcare and education promises, Mr Kejriwal also defended his deputy Manish Sisodia, who is facing a CBI probe over Delhi’s now-overturned liquor sales policy, and accused the BJP of targeting its political opponents using central agencies.

“I am hearing Manish Sisodia may be arrested in three-four days. Who knows, I may also be arrested. All this is being done for Gujarat elections,” the AAP chief said.

On a two-day visit to the state that will hold elections later this year, Mr Kejriwal is accompanied by Manish Sisodia.

The Aam Aadmi Party, launched by members of the watershed 2011 India Against Corruption movement, forayed into politics with spectacular back-to-back victories in Delhi and has since scored an equally stunning win in Punjab earlier this year.

Although his attempt to catapult into national politics with the 2014 general election headlined by a head-on contest against PM Modi from Varanasi bombed, Mr Kejriwal has since been increasingly bold about his party’s national ambitions.

After a largely inconsequential campaign in the country’s most politically vital state Uttar Pradesh earlier this year – tempered by the Punjab win and a lukewarm outcome in Goa – the AAP has set its crosshairs on Gujarat and Himachal Pradesh.

However, given the advice of strategists like Prashant Kishor and others, and the scale of the hard-to-live-down 2014 debacle, Mr Kejriwal has avoided a direct confrontation with PM Modi – a dramatic departure from his early days when he famously called him a “coward and psychopath”.

Currently going toe-to-toe with the BJP with a carefully crafted strategy to not alienate the party’s enormous base of voters high on sentiments of nationalism and religion, the AAP last week launched a “Make India No. 1” campaign, widely seen as its platform for the 2024 Lok Sabha elections, hard selling its record of transforming Delhi’s schools and hospitals.