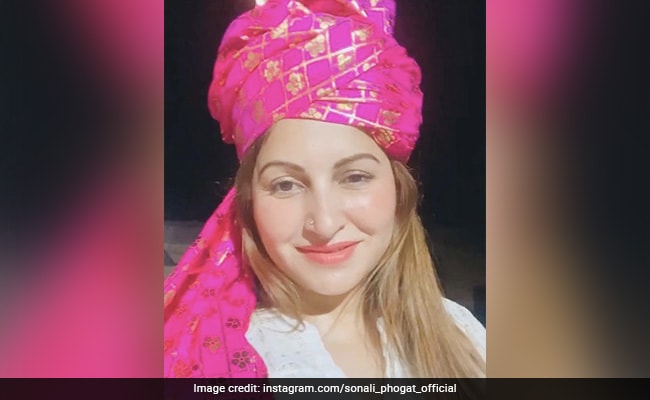 She changed her profile pic at the same time. The photo showed her in a pink turban.

Sonali Phogat died of a heart attack on Monday night in Goa. She was 42.

She had gone to Goa with some of her employees. She was taken to hospital after she complained she was unwell.

The actor-politician had posted a series of images and videos on Instagram shortly before her death.

In one video with no hashtags, she was seen wearing a pink turban. A video with hashtags Haryana, Haryanvi, Chore, showed her with a group of people.

The video was also tagged to @suneelrao (Suneel Rao), who is a BJP leader from Haryana, and @binderdanodaofficial (Binder Danoda), who claims to be an artist on his Instagram profile.

Sonali Phogat had also posted four photographs showing her in the pink turban, with hashtags like “Real Boss Lady”, “Haryana”, “Dabang”, “Always ready” and “Smile for the pictures”.

She had 8,85,000 followers on Instagram and her profile described her as a “mother, actor and content creator.”

Sonali Phogat contested the 2019 Haryana election from Adampur as a BJP candidate. She lost to then Congress leader Kuldeep Bishnoi, who recently joined the BJP.

Mr Bishnoi resigned as an MLA last month and met with Sonali Phogat last week amid speculation that she would be the BJP candidate from Adampur in by-elections.

Sonali Phogat shared a photo of that meeting on social media.

Sonali Phogat rose to fame with her TikTok videos and had a huge following on the video-sharing app. She joined the BJP in 2008.

She also participated in the 2020 edition of reality show Bigg Boss.

She has a daughter, Yashodhara Phogat. Her husband, Sanjay Phogat, died in 2016.