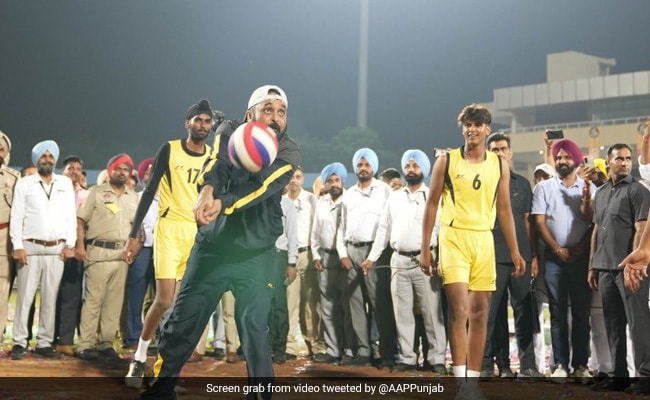 Bhagwant Mann played a volleyball match for around 10-15 minutes

Mr Mann, who used to play shooting volleyball, tried his hands at a smash volleyball game at the event.

With his security personnel standing outside the volleyball court, Mr Mann, wearing tracksuit and a cap backwards, positioned himself in the centre and showed his gaming prowess.

He not only served but also scored some points for his team with his game.

Mann Sahab on the pitch
💯

Later, the players said they were amazed at his skills on the court.

Addressing a gathering after inaugural, Mr Mann said more than four lakh players in six age groups are expected to participate in the competitions from block to the state level in 28 sports categories.

He said that state-level winners will be given cash prizes totalling Rs 6 crore, and added that these games will be an annual feature in the state’s sports calendar.

“I am elated to see Punjab happy and the youth in the field of sports,” said the CM, who was accompanied by his wife at the event.

The state government has been making all out efforts to promote sports across the state and channelising the energy of youth in a positive manner, said Mr Mann.

He said these games were a right step towards this direction as they will provide a platform to the players to show their talent.

Mr Mann asserted that it will also help the state government to identify strengths and weaknesses of the players which will come in handy for their grooming for the national and international events in future.

It is a matter of great pride for the entire state that these games are being held in every nook and corner of Punjab, he said.

The CM said the Aam Aadmi Party government is working on an aggressive campaign to produce a maximum number of trained sportspersons and to have more Punjabi players in the Indian contingents for international events.

Punjab has abundant sports talent and the state government will not leave any stone unturned to enable players to participate and win Olympic medals for India, he said.

He also remembered hockey wizard Major Dhyan Chand on his birth anniversary and told the young players to take inspiration from the hockey legend on this day.

He assured the players that they will be given a state-of-the-art infrastructure and world class facilities.