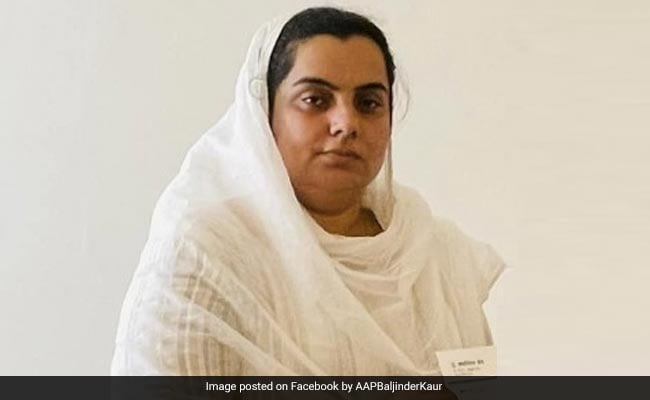 The viral video of Punjab AAP legislator Baljinder Kaur being slapped and shoved by her husband Sukhraj Singh Bal, who is also an AAP leader, at their home in Bathinda district has re-ignited a wider conversation on domestic abuse and “culture”. She is quiet on the matter so far.

“If a woman in Baljinder Kaur’s position doesn’t feel safe enough to lodge a complaint, how must an ordinary woman feel?” writer-activist Nikita Azad said on Twitter.

You can be an MLA & still be subject to domestic violence; such is the state of DV against women in India. If a woman in Baljinder Kaur’s position doesn’t feel safe enough to lodge a complaint, how must an ordinary woman feel?

The state women’s commission has taken note of the incident, reported to be from July and caught on a CCTV camera near the house in Talwandi Sabo. Baljit Kaur, the lone woman minister in Bhagwat Mann’s AAP government said she would ask the commission to step in. “There is no formal complaint so far,” she told the media.

Baljinder Kaur is married to Sukhraj Bal since 2019. They have a daughter. A former professor of English who is two-time MLA from Talwandi Sabo, she has been posting about her public meetings on Twitter and Facebook, but nothing on the video that went viral.

Among those urging Chief Minister Bhagwant Mann to intervene is Harsh Vivek Singh, who questioned “the eerie silence of Punjab AAP’s overt and covert social media cells”.

Baljinder Kaur is a member of the national executive of AAP and heads the party’s women wing in Punjab.

Another Twitter user, Harinder Singh Bainhara, said “we strongly condemn” the violence as “Punjabis are always known to protect women”.

I was very saddened to see the incident that happened with MLA @BaljinderKaur_ .Being on the post of MLA is another thing,first of all she is a woman.Punjabis are always known to protect women.Not to humiliate the woman in front of the public.Therefore,we strongly condemn these.

Punjab Youth Congress chief Brinder Dhillon, too, sought to raise a social question against “this male chauvinism attitude”. “Mindset of men has to change. The problem lies in the perpetrators of these acts,” he said in a tweet.

Shiromani Akali Dal’s Harsimrat Kaur Badal, Lok Sabha member from Bathinda, listed Ms Kaur’s husband among “weaklings who feel superior using violence on women”. She said he must “issue a public apology and mend his ways or strict action as per law should be taken against him”.

Totally condemn the despicable violence by husband of T.Sabo MLA Baljinder Kaur. We must call out such weaklings who feel superior using violence on women. Baljinder’s husband must issue a public apology & mend his ways or strict action as per law should be taken against him.

In replies to her tweet, some people said “mending his ways” should not be an option as against legal action.

There were others who said it’s “an internal issue” of the family that “should not be made so big”.

There was outrage over domestic violence — and the culture of shame and silence around it — in Punjab last month, too, over another, much more severe case, in which an Indian woman died by suicide in the US. Mandeep Kaur, from a Punjabi-speaking family of Uttar Pradesh, had shared videos detailing abuse by her husband that went viral.