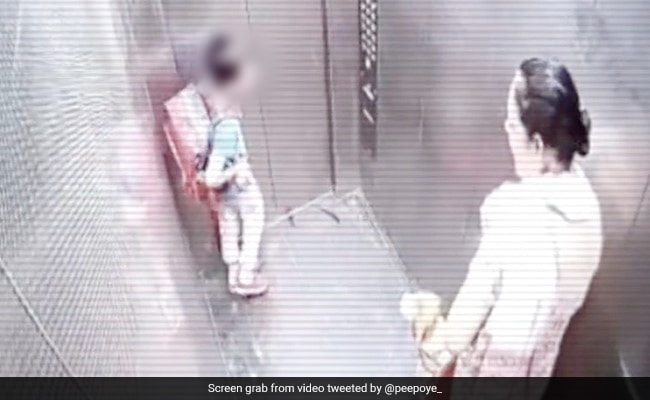 A shocking video showing a pet dog biting a little kid inside a housing society lift in Uttar Pradesh’s Ghaziabad has surfaced online. According to a Twitter post, the incident took place on Monday in Charms Castle society located in Rajnagar Extension. The video showed a pet dog pouncing on a child and biting him, even as the dog’s owner looked on.

Take a look below:

a pet dog bites a kid in the lift while the pet owner keeps watching even while the pet owner the kid is in pain! where is the moral code here just cos no one is looking?
.
.
p.s: @ghaziabadpolice
Location: Charms Castle, Rajnagar Extension, Ghaziabad
Dtd: 5-Sep-22 | 6:01 PM IST pic.twitter.com/Qyk6jj6u1e

The little boy was already standing inside a housing society lift when an older woman walked in with her pet dog on a leash. As the kid moved to the front of the elevator, the dog jumped up and bit the child on the leg.

The boy then immediately reacted with pain and began jumping up and down on one foot. However, the pet owner kept looking at the boy and did not react.

The footage prompted a response from the Ghaziabad Police. They informed that they have registered a case based on the complaint of the parents. They said in a tweet in Hindi that advance legal action is being taken by the Nandgram police station.

The video left the internet furious too. “Shame, she is much bothered for the dog than the kid who is in utter pain. So ruthless lady must be punished,” wrote one user. “I feel ashamed that day by day people are losing their sensibility and kindness. Such a shameless lady,” added another.