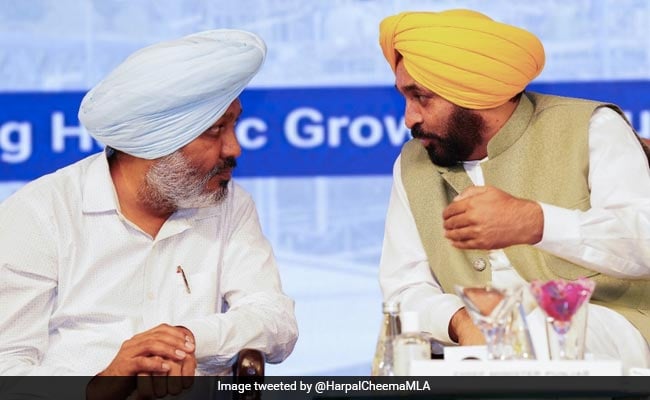 Bhagwant Mann in conversation with his minister Harpal Cheema (File)

Having “failed in Delhi”, the BJP’s “Operation Lotus” is at play in Punjab, claimed the Aam Aadmi Party or AAP on Tuesday. Denying the charge, the BJP, which has just two MLAs in the state, has suggested that a rift is growing within the AAP leadership.

“Operation Lotus” is a code name used by Opposition parties to refer to “poaching” of MLAs by the BJP.

The Punjab MLAs have been asked to come to Delhi to meet big leaders, and offered crores to switch sides, claimed Punjab Finance Minister Harpal Cheema.

“Come to Delhi, will get you to meet the big BJP leaders,” claimed Mr Cheema citing one of the calls received by a party MLA.

Earlier this month, the Arvind Kejriwal-led party accused the BJP of misusing central government’s agencies and offering “Rs 20 crore each” to some of its Delhi MLAs to cross over to the national party.

“The BJP is offering Rs 25 crore per MLA to switch sides. Operation Lotus may have succeeded in Karnataka, but the Delhi MLAs stayed firm and failed the BJP operation,” said Mr Cheema at a press conference.

“If there is a change of government in Punjab, you (MLAs) will be offered big promotions, posts,” said Mr Cheema, reiterating that MLAs have received very many calls asking them to bring down the Bhagwant Mann-led government.

When pressed by reporters to answer how many MLAs have been approached by the BJP, the Punjab Minister said some 10 MLAs.

“For the last one week, they are trying to buy our MLAs. They have approached some 7-10 MLAs, directly and indirectly. Will give proof at the right time,” said Mr Cheema, adding that the AAP is working on the legal aspect of the situation.

In turn, the BJP has called the charges against it “baseless”.

“The baseless allegation made by the Punjab minister Harpal Cheema against the BJP of toppling the state government shows that AAP is leading to a big split in Punjab. The party is on the verge of being torn apart by Kejriwal’s interference,” said Subhash Sharma, state General secretary, Punjab.