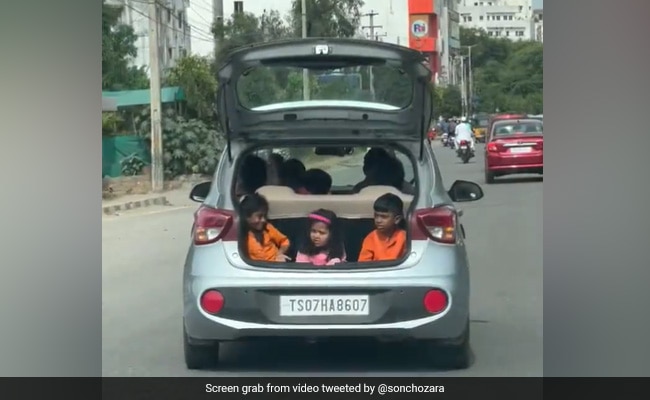 Hyderabad Police issued an E-challan to the driver.

The Cyberabad traffic police immediately responded when a Twitter user, Soncho Zara, shared a video of a moving car with three kids sitting in an open boot in Hyderabad. The video has amassed more than 11,000 views on Twitter. Tagging the police, Soncho Zara wrote, “How irresponsible parents they are? Pls take review sir and action.”

The clip shows three kids sitting in an open boot while parents are seen seated inside the vehicle. Soon after the video went viral on the internet, the Police reacted to the matter and requested the user to provide location details for further action. In another tweet, the Cyberabad Police responded and wrote that the necessary action has been taken against the offenders. The Cyberabad Traffic Police wrote in response to the tweet, “Your information has been verified and E-Challan has been generated. Thanks for joining hands with Cyberabad Traffic Police in improving road safety.”

Check out the video here:

How irresponsible parents they are? Pls take review sir and action. @KTRTRS@TelanganaCOPs@HiHyderabad@tsrtcmdofficepic.twitter.com/zqnoZ5L0HM

Sir,
Your information has been verified and E-Challan has been generated. Thanks for joining hands with Cyberabad Traffic Police in improving road safety.

According to Motor Vehicles Act 2019, a car can carry only as many people as it is designed to carry in the Certificate of Registration. In a 4+1 car, only 4 passengers can be seated, excluding the driver.

However, the challan has divided the internet. While many expressed that an E-challan for such an offence made sense, others suggested that strict action against the driver should be taken for putting kids’ lives in danger. A comment read, “Arrest the parents for jeopardizing the lives of the children. The parents should know better. What kind of lessons are they giving their children? Irresponsible parents will bring up irresponsible children later to be irresponsible citizens. Ban the parents from driving for 5 years.” The internet also chided the parents for being so careless. “Even this is a very dangerous act by the hired Auto/7 seater. Parents should be cautious,” read the comment.