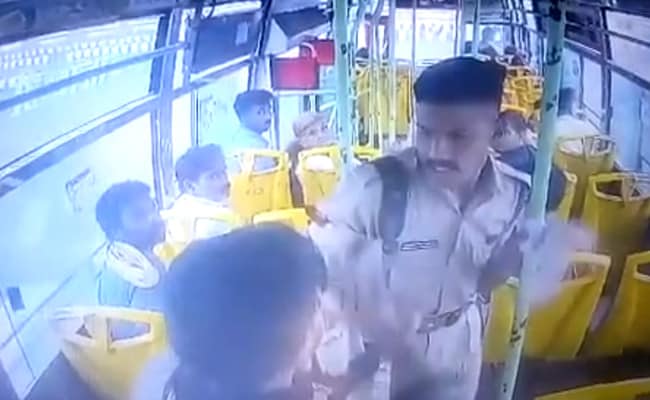 The video shows the passenger refusing to listen to the conductor .

A video gaining traction on social media shows a passenger thrashing a city bus conductor in Madhya Pradesh’s capital Bhopal after an argument over fare. The incident took place on Tuesday around 10 am when the passenger, an NCC cadet, boarded the bus near the Board office for police headquarters. The entire incident was captured on CCTV installed inside the bus. A police complaint has been filed at Jahangirabad police station in the city and the cops have launched an investigation.

The 25-second video shows an argument between the bus conductor and the NCC cadet in uniform over the fare. According to police, the fare for the route that the young man took is Rs 15, while he insisted on paying Rs 10 to the conductor.

NCC cadet thrashed city bus conductor in Bhopal, an argument broke out between the bus conductor and the NCC cadet over the difference of 5 rs. bus fare @ndtv@ndtvindiapic.twitter.com/hnA8B08sBw

The video shows the passenger refusing to listen to the conductor and proceeding to get down at his bus stop.

But the conductor is seen asking for money, which infuriates the NCC cadet who turns around and shows some aggression. The bus conductor pushes him back and that’s when the passenger starts punching him, as seen in the video.

He brutally thrashes the conductor while other passengers watch in horror. After some time, realising that his destination is approaching, the young man leaves the conductor behind, picks up his bag and heads towards the gate of the bus. The conductor is seen going after him but the man quickly gets down.

The civic body, which runs the bus service, has handed over the CCTV footage to the police and even filed an FIR against the NCC cadet. A case has been registered  A case was registered at Jahangirabad police station against the NCC Cadet under section 323 (voluntarily causing hurt)  and 504 of IPC,” police told NDTV.